Death of a Cold Pool

It's been an interesting few days down here in the valley.   Most cold pools (a.k.a. inversions) start clear.  Then, if conditions are right, fog develops after a few days, followed by a gradual evolution into a cloud-topped mixed layer with stratus.   Pataki et al. (2005) describe one such event.

The current event is unusual in that stratus blanketed the valley at onset, but dissipated over time.  Setting all of this up was the pre-existence of a cloud-topped mixed layer with stratus, which was a leftover of the incredibly wet storm cycle from the preceding week.  Usually, we don't have that layer of clouds during the initial stage of a pool event.  Then as typically happens during cold pool events, a subsidence inversion developed and gradually descended.  This led to a thinning of the cloud-topped mixed layer and ultimately the demise of the stratus.  The descent of the subsidence inversion is very well depicted in the morning soundings over the past three days. 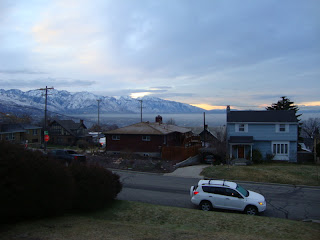 Now, if the current cold pool were to persist for a week or two, perhaps we would see the usual evolution from here with fog forming after a few days and then a cloud-topped mixed layer.  Fortunately, Mother Nature has other plans in store as the coming week looks to be an active one with a bonafide return to winter-like temperatures.
By Jim S Posted at 12/26/2010 09:11:00 AM