State of the snowpack

For the Wasatch Weather Weenies' 100th post, I thought we'd stop talking about depressing inversions and instead take a look at the state of the snowpack.  The Colorado Basin River Forecast Center (CBRFC) maintains a great web site probing the automated SNOpack TELemetry (SNOTEL) data collected by the NRCS and I visit it frequently for planning ski adventures outside of the Cottonwood Canyons.

The SNOTEL data shows that we have an average to above average snowpack across most of the Wasatch, Oquirrh, and Stansbury Mountains.  All but two stations, Mill D South in Big Cottonwood Canyon and Ben Lomond Peak, are reporting at least 90-110% of average snowpack snow-water equivalent (SWE) and most are well above average.  This is also true in the western Uinta Mountains. 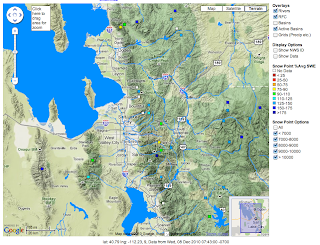 Sidebar: Note that I am using the word average rather than normal.  We can measure and calculate an average and a departure from average, but that departure is not necessarily abnormal.  It could be within the realm of typical weather variability.  Defining normal requires an understanding of weather variability and depends somewhat on one's perspective.  This is discussed at length in an essay by Chuck Doswell.

There are some important mesoscale details about the current snowpack that are relevant for skiing.  The first is that the big winner here is the Snowbird SNOTEL, which is presently at 182% of average snowpack SWE (green line below).  Snowbird is one of the snowiest SNOTELs in northern Utah, so when it is above average, there's alot of snow.  In fact, the SNOTEL is reporting 15.4 inches of snowpack SWE, which corresponds to Snowbird's average on about January 10th (blue line).    The bottom line is that the deepest snowpack in our area is in the high terrain around Little Cottonwood Canyon. 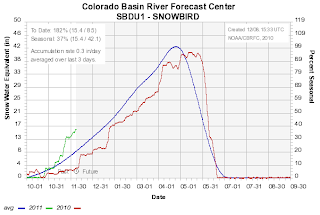 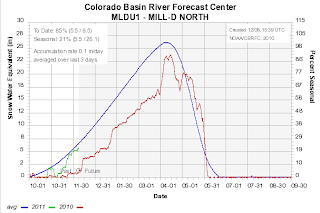 I personally like to examine the snowpack SWE rather than the percent of average when planning ski tours outside of the Cottonwood Canyons.  Average in the Stansbury and Oquirrh Mountains, for example, is lower than that found at Snowbird, so you need to look at the actual snowpack SWE to get an idea of how good the coverage is.  Currently, the snowpack SWE at the Mining Fork SNOTEL in the Stansbury mountains is 167% of average, which sounds quite healthy.  But, because this site is not as snowy as Snowbird, this equates to a snowpack SWE of only 5.9 inches, which is pretty meager. 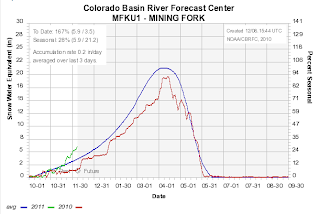 The bottom line is that the SNOTEL data available on the CBRFC web site are really useful for planning snow adventures around the state.  Keep in mind, however, that it can be useful to dig in beyond the percent of average, look at the actual snowpack SWE, and put it into its proper context relative to the local climatology.
By Jim S Posted at 12/08/2010 08:51:00 AM