I was surprised yesterday at how quickly the "smaze" (smog+haze=smaze) layer seemed to deepen in the afternoon.  John suggested to me that this might reflect not only vertical aerosol/pollutant transport, but also increasing relative humidities, which in turn resulted in the formation of wet haze as water vapor condenses onto hydroscopic aerosols.  Wet haze formation typically occurs at relative humidities of ~75% or greater and results in decreased visibility than would be produced by the aerosols alone.  Thus, we might expect to see some sort of a change in visibility as the RH increases above 75%.

There is some evidence supporting this hypothesis.  First, the RH observed by one of the citizens weather observing sites in Olympus Cove  (5100 ft MSL) increased shortly after noon yesterday and has remained solidly above 80% ever since. 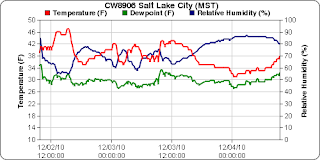 Second, there is a clear deepening of the moisture layer evident in soundings from KSLC.  At 1200 UTC yesterday (3 Dec), a shallow moist layer (i.e., a layer with small dew point depression) extended from the surface to about 850 mb (~1500 m or 5000 ft MSL), above which it was much drier.

And it remains this morning.

Thus, the haze formation likely contributed to the dramatic decrease in visibility observed at bench level yesterday (see photos in earlier post).
By Jim S Posted at 12/04/2010 10:18:00 AM