Making sense of mountain weather observations is not always as easy as it looks.  Today provides an example where the temperature observations in the Cottonwood Canyons are difficult to explain and, in some cases, may be influenced by instrumentation problems.

Before looking at the data, let's have a quick review of the overnight weather and morning sounding.  Skies were mainly clear overnight, leading to great conditions for radiational cooling.  Winds were also light.  Under such conditions, cold pools/inversions typically form in the valleys and canyons of the Wasatch Mountains.

Today we also have a large-scale inversion near mountain top level.  This inversion shows up very well in the sounding from the Salt Lake City Airport, which has a surface based inversion as one typically finds on a clear morning, and an elevated inversion located near 700 mb (about 10000 feet).

This inversion further enhances the stability of the mountain atmosphere.  It also allows for inversion conditions to persist until later in the day when the valley cold pools are typically removed by surface heating.  For example, at 11 am this morning, it was 21 at the top of the Collins chair at Alta, but still only 16 at the base. 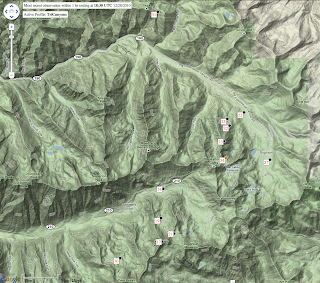 This makes sense so far, but if you look at the MesoWest plot above, you'll also see some sites that have really warm temperatures:

Balmy!  But are these temperatures reflective of the air temperature at these sites?  That's a tough question, and here's why.  Many of the temperature gauges used by SNOTEL stations and ski areas are not aspirated, meaning that they don't have a fan to constantly cycle air through the gauge.  As a result, they tend to "spike" or get anomalously warm when the sun is out and the wind light.
Although I'm sure it feels quite warm if you are sitting in a sunny calm location in the mountains today, I suspect that the high temperatures above are largely due to poor aspiration of the temperature gauge.  Why?  Note that at the Alta Collins and Mount Baldy sites the temperature is only 21 and 17 F, respectively, which is much cooler than the stations noted above.  At both of these locations, a steady wind of at least 10 knots is blowing, which is sufficient to aspirate the gauge so that its temperature is more representative of the actual air temperature.
These sort of quandaries are not unusual when interpreting weather observations, which are not ground truth.  Observations have errors and problems.  As such, it's good to remember that "all observations are bad, but some are useful."
By Jim S Posted at 12/28/2010 12:32:00 PM