It never rains in southern California, it pours.  At least that's how the 70's pop song by Albert Hammond goes.

Perhaps the same could be said of southern Nevada and southwest Utah.  This morning's radar loop shows widespread precipitation from SoCal-Las Vegas-St. George.  Note that the Cedar City radar is out, so we have a huge hole in radar coverage from St. George to at least Nephi. 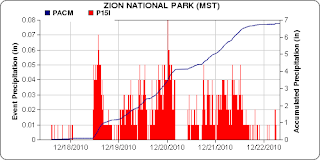 Little wonder that the folks in Utah's Dixie are so concerned.  At the Las Vegas International Airport (KLAS), they had only a little precipitation prior to Monday afternoon.  Since then, over an inch has fallen, and it is really dumping this morning.  Keep in mind that their average annual precipitation is less than 5 inches, so this is a real gully washer for them. 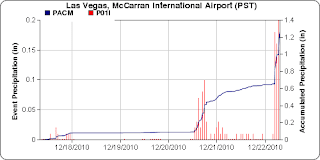 Now let's go to SoCal where it never rains, it pours.  Palm Springs regional Airport (KPSP) is now over 3 inches in the past four days, with the heaviest rain coming in the last 12 hours.  This is over half of their annual average precipitation of about 5.5 inches. 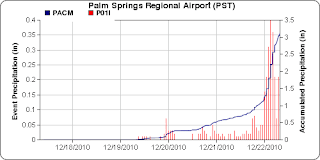 Of course, the SoCal mountains are doing even better.  How about the Lytle Creek RAWS station in the San Gabriel Mountains.  Roughly 25 inches in the past five days. 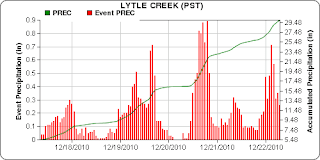 Incredible stuff, fueled in large part by a persistent, slow-moving atmospheric river from the subtropics (a.k.a., the Pineapple Express).  The latest total precipitable water from the SSEC at the University of Wisconsin-Madison shows this quite nicely.