Cloud processes and skiing: Part I

Yesterday provided a great example of how cloud processes can affect your backcountry ski day.  In particular, a stiff rime crust made for challenging turns at upper-elevations while, at lower elevations, the snow rapidly warmed, even on northerly aspects, and then froze after skies cleared in the afternoon.  What was the cause of this cruelty to skiers?

In a word, altostratus, a layered midlevel cloud.  The altostratus that was draped across the Wasatch yesterday was at the perfect temperature to lay down a rime crust at upper elevations and dampen the snowpack elsewhere, even on aspects that receive limited solar radiation this time of year.

Let's begin by taking a look at the morning sounding from KSLC. 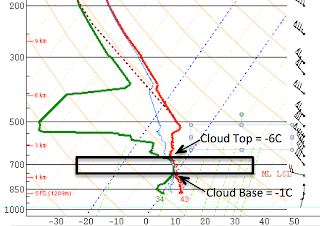 As indicated by the box, the altostratus layer extended from 750 to 650 mb.  The temperature at cloud base was -1C, while at cloud top it was -6C.  Thus, we have a shallow cloud with temperatures that are just below what is commonly thought of as being freezing (i.e., 0C).

However, water does not necessarily freeze at 0C.  In order to freeze, water molecules need a template for how to arrange themselves into an ice crystal.  Particles that provide such a template are known as ice nuclei.  The best ice nuclei is ice itself because it provides a template that precisely matches the structure of an ice crystal.  Ice allows water to freeze at 0C.  In the absence of ice, however, the water will become supercooled,  If the water is absolutely pure, with no embedded particles that might act as an ice nuclei, it will not freeze until the temperature falls to about -40C.  Such freezing of a pure water droplet is called homogeneous nucleation.

The temperature at which a supercooled cloud droplet will freeze depends on its temperature and the molecular structure of any particles it encapsulates or comes in contact with.  Particles that can induce freezing at temperatures above -6C are extremely rare.  One that can do it is silver iodide, which is used for cloud seeding and can induce freezing at -4C, but you don't find naturally occurring silver iodide in clouds.  As a result, yesterday's altostratus cloud existed almost entirely of supercooled cloud droplets.  The cloud droplets froze whenever they contacted the snow or ground, which is why we ended up with a stiff rime crust at elevations above cloud base.  The ski photo might not look bad, but a closer look reveals chunky snow scattered about these tracks.  The white coating on the rocks above the skier is also evidence of rime.

If the altostratus deck were deeper and hence colder at cloud top, enough ice particles may have formed an fallen through the cloud to convert some of the supercooled cloud droplets to ice.  Such a mixed-phase cloud (meaning it consists of both ice and supercooled water) can still produce riming, but there's less cloud water, so the riming rates are greatly reduced.

In our next post, we'll take a look at how the altostratus deck also trashed the powder below cloud base by providing long-wave radiation that induced snowmelt even on the north aspects.
By Jim S Posted at 12/13/2010 11:33:00 AM