The Utah Division of Air Quality provides real-time PM2.5 data on their web site, which I believe is for Hawthorne Elementary at about 1700 South 700 East.  I typically keep an eye on this data during inversions, with the caveat that the data is not quality assured and during inversions the PM2.5 concentrations may very a lot spatially (especially during a shallow event like this).

As evident in the graph below, it appears we will be above the 24-h National Ambient Air Quality Standard (NAAQS) for the calendar day (midnight-midnight), although we have a few hours until this is in the bag. 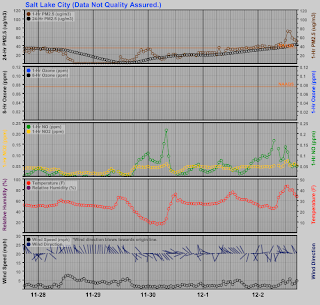 Consistent with the elevated PM2.5, the 0000 UTC sounding from the airport shows a remarkably shallow ~8C inversion that is based essentially at the surface.  Today, as is often the case during shallow cold pool events, the afternoon sounding shows little or no evidence of a convective boundary layer, despite the fact that temperatures have increased during the day.

This type of thermodynamic evolution contrasts with the conventional conceptual model of boundary layer evolution (e.g., Stull 1988, below), which suggests that as the surface warms, a convective boundary (mixed) layer should develop.  As such, you would think you would see a shallow CBL in the afternoon soundings.

At issue is how can we explain the thermodynamic evolution of the sounding and stable boundary layer at the airport?  Share some ideas if you have them.
By Jim S Posted at 12/02/2010 07:31:00 PM