The automated, high-resolution snowfall and water equivalent forecasts we produce for weather.utah.edu are better than what you get from the operational modeling systems without postprocessing, but still have their weaknesses.  This week provides an excellent example.

First we had Monday's so-called "upside down" storm.  Snowfall was heaviest on the east bench, as was water equivalent.  Below I cherry-pick data from a couple of sites to highlight this aspect of the storm characteristics. 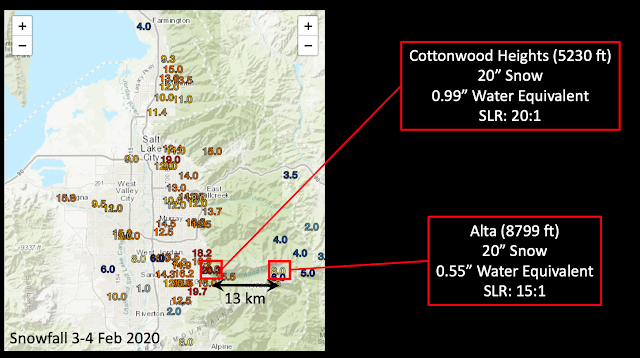 Presently, the technique we use to "downscale" the various modeling systems (NAM, GFS, SREF, NAEFS) and achieve a higher resolution forecast assumes climatological precipitation-altitude relationships.  This allows for increased spatial detail (see raw and downscaled NAM quantitative precipitation forecast below as an example) and does result in improved skill, but the technique fails to capture the spatial structure of storms like the one on Monday. 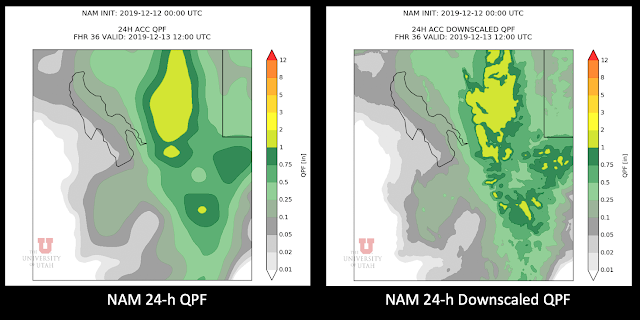 The 2nd storm, which began Wednesday night, has produced more precipitation in the mountains as is more typical.  Alta-Collins has recorded over 3 inches of water from 9 PM Wed to 7 AM this morning (Friday), but this is lower than manual measurements which are over 4 inches.  In any event, a great deal of water equivalent has fallen.

For comparison, the Salt Lake International Airport has received only 0.38 inches.  Thus, Alta has received about 10 times more precipitation than Salt Lake City, when climatology for this time of year is about 5.  In other words, this 2nd storm features much larger than average orographic enhancement.

Again, we don't account for this extreme either when we downscale using climatological precipitation-altitude relationships.  As a result, if we look back at the SREF water equivalent forecasts for Salt Lake City (top left panel below), 0.38 inches lies in the range of forecasts, but most of the members were above this amount.

Conversely, at Alta, the wettest member produced just under 2.5 inches, so we're still well below observed.

We are working on techniques that better account for such variations, but they aren't ready for prime time yet.  In the long run, we will have higher resolution ensemble modeling systems that may have greater ability to predict these variations (the HRRR showed some skill for example in the Monday storm).  The Alpine nations already have such ensemble systems.  Switzerland runs a 2.2 km resolution ensemble, France 2.5 km, Germany 2.2 km, and Italy 2.2 km, but the US lags behind.  Send me some money and we'll bring Utah into the 21st century and provide spatially detailed forecasts that will blow your mind.

There is another issue with the SREF forecasts for Alta above and that's the snow-to liquid ratio.  As illustrated by the grey line and fill in the lower right-hand panel, the snow-to-liquid ratio prediction from the SREF was far too high.  It never got below about 14:1, when in reality, we've had a great deal of very high density snow.

I'm a bit surprised at this.  The algorithm we have for snow density generally works well and is usually not off by that much for higher density snow.  That being said, we know it's not perfect and are working on updates for next season.
By Jim S Posted at 2/07/2020 07:50:00 AM