Strong winds accompanied a cold front that moved through northern Utah last night.  In my neighborhood, it's garbage pickup day and there were many tipped cans and much garbage strewn about, not to mention bleary-eyed people who were awoken in the night by windows rattling.

The strong winds came in the northwesterly flow following the frontal passage.  Peak gusts at the Salt Lake City International Airport (41 mph) occurred at about 0820 UTC (0120 MST).  The situation shortly after that at 0900 UTC (0200 MST) when I was awoken by the storm is shown below and illustrates the widespread northwesterly postfrontal flow. 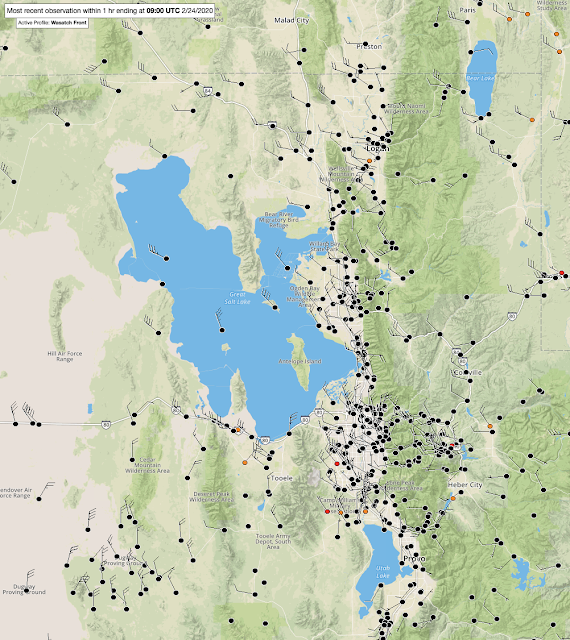 A quick look at the overnight observations shows many valley sites recorded peak gusts of over 50 mph.  The peak gust in the Salt Lake Valley appears to be 59 mph on the Baccus Highway (SR 11) near 6200 South (a somewhat elevated location on the west bench.  The University of Utah reached 50 mph on the top of the 8 story William Browning Building.

It was nuking in the mountains as well.  While ridgetop gusts hit 100 mph at one location in the central Wasatch this morning, most notably, there was a 73 mph gust at Parley's Summit, which is quite impressive for that location.

By and large, my impression is that we didn't do a great job letting people know it was going to blow as hard as it did.  It's easiest for me to go back and look at NWS forecasts as they are archived and the zone forecast issued for the Salt Lake and Tooele Valleys at 304 PM yesterday afternoon has no mention of wind. 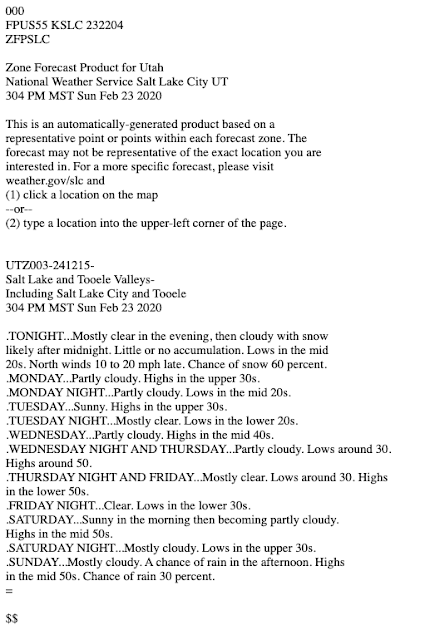 That being said, the NWS area forecast discussions did mention the potential for gusty winds behind the front, but I think overall we (i.e., the weather community) could have perhaps done a better job of indicating the strength of the gusts.  I think people were surprised, although in the end, these don't appear to have been damaging winds in the lowlands.

Email ThisBlogThis!Share to TwitterShare to FacebookShare to Pinterest
Labels: Wind