The phrase dirty ridge is commonly used by meteorologists to describe ridges or high pressure systems that are associated with clouds and precipitation.  For a variety of reasons, we're experiencing one at present and for the rest of the work week.

The situation at 1200 UTC (5 AM MST) this morning (monday) is below and it shows the high-amplitude ridge at 500 mb (black contours below) off the Pacific coast, with Utah in the downstream north-northwesterly flow. 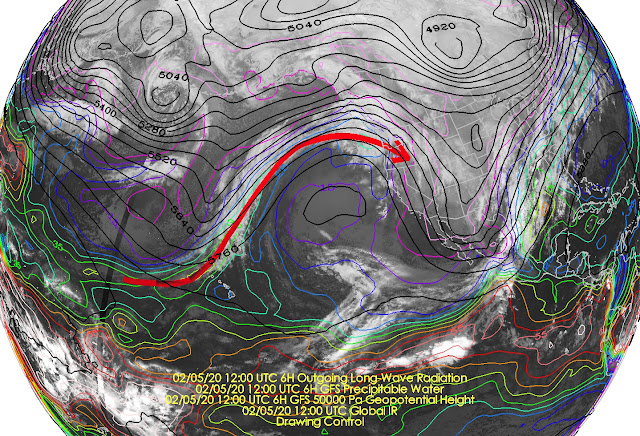 Critical to this ridges dirtiness, however, is that it has tapped into tropical and subtropical moisture near Hawaii.  This is illustrated by the integrated water vapor (a.k.a. precipitable water) contours (warmer indicates higher values), which show high values extending northward from Hawaii and then curving clockwise into the Pacific Northwest before diving southeastward toward Utah.

A better illustrator of the atmospheric river conditions is the integrated vapor transport forecast below [valid for 1200 UTC (0500 MST) this morning].  This is basically the product of the water vapor and the velocity, hence the term "transport."  One can see high values of water vapor transport similarly extending from Hawaii to the Pacific Northwest. 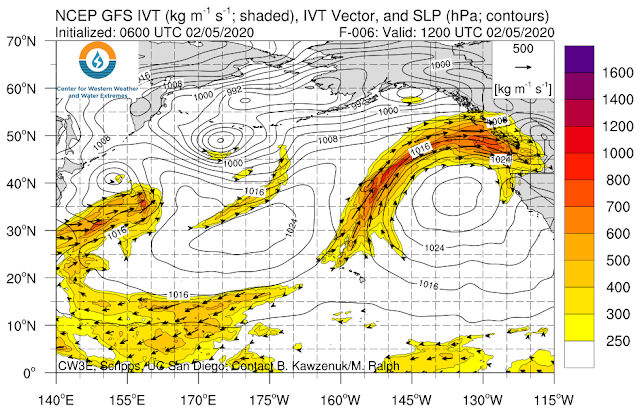 Also contributing to the dirtiness is a pronounced warm frontal zone that is draped at present over northern Utah.  Knowledge of atmospheric dynamics allows us to identify frontal zones in vertical soundings like the one below from this morning at Salt Lake city Airport.  Note the very strong stable layer based at 700 mb and how the wind veers (turns clockwise) with height from 700 mb to 500 mb.  Frontal zones are characterized by high static stability (e.g., stable layers) and a veering wind profile indicates warm air advection (i.e., flow from warm to cold air).  Thus, the warm frontal zone is directly over us. 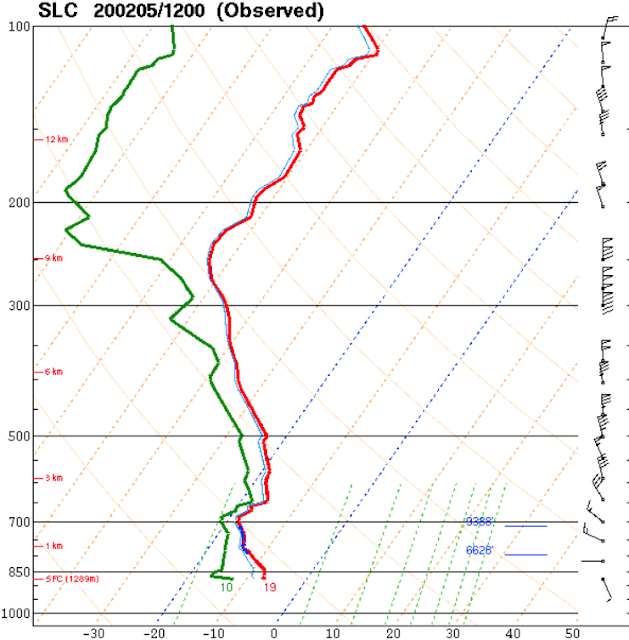 Thus, while the area downstream of a ridge is not necessarily favorable for large-scale rising motion and cloud and precipitation generation, the warm advection associated with the warm front counters this.  One doesn't get a big storm perhaps, but if you look outside you'll find layered clouds and some occasional light snow.  Radar imagery at 1452 UTC (0852 MST) shows very light returns covering a relatively wide area, indicative of large scale ascent. 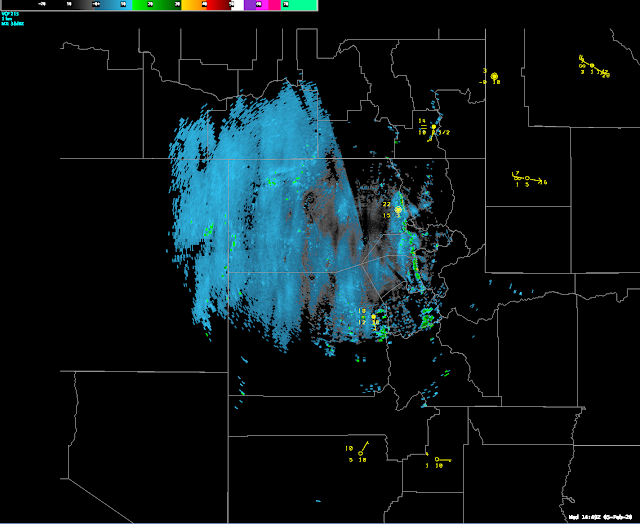 Between now and Friday afternoon (08/00Z below), we're basically under the influence of the dirty ridge.  Temperatures in the mountains will be rising today and crest-level winds will be on the increase.  We'll be seeing a bit of snow here and there and potentially some rime at upper elevations, the latter during periods when the moisture and clouds are not deep enough to stimulate snowfall production.  The SREFF does add up to a mean of 1.5 inches of water and nearly 20 inches of snow by 08/00Z at Alta Collins, much of it falling tomorrow through Friday.  There is, however, a large range.

That's the story for the rest of the work week.  Prepare to get dirty!