A Trip to Bizzaro World

Today's ski tour was one of the more surreal that I can recall.

For better or worse, we decided to leave late, opting to head out mid morning.  It seemed pointless to deal with the canyon traffic, but with the weather of the past week, it seemed essential to get to high elevations in the hope of finding decent snow.

We opted to drive to the canyon mouth anyway, where the sign said the canyon was closed above mile post 11.  Hooray, we can find something to ski below that, even if it's just a walk in the woods.  We talked our way through the bottom roadblock and then another partway up the canyon.  We ended up skinning up the Mineral Fork road in complete solitude.

The snowpack at elevations we skied was topped by a stout crust.  In places it was 5 cm thick. 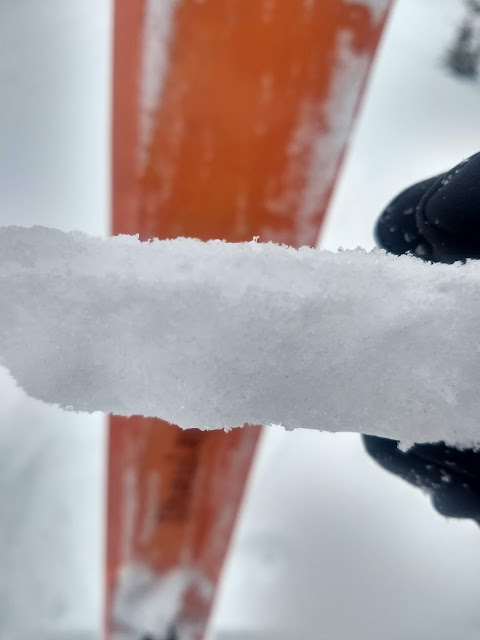 A close look at the crust, which my photo doesn't really reveal, showed that there were two layers, with the one on top relatively clear and perhaps 5 mm thick. 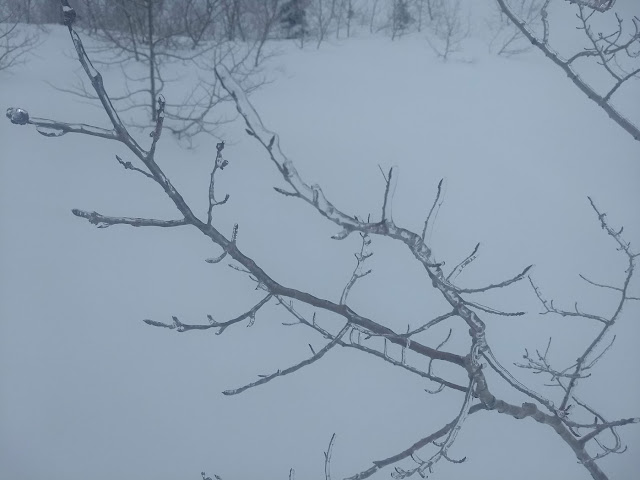 Rime ice is not uncommon in mountain areas, but is typically produced by smaller cloud droplets and has a white, translucent look.  Clear ice of the type above requires bigger droplets.  At least drizzle sized if not larger.

Thus, the clear ice is evidence of either freezing drizzle or freezing rain.  The distinction between drizzle and freezing rain can be made based on size (drizzle droplets have diameters < 0.5 mm, rain > 0.5 mm) or process.  With regards to the latter, the pathway to freezing rain typically involves snow falling through a warm layer (>0˚C), melting into rain, and then falling into a subfreezing layer where it becomes supercooled but does not freeze until it contacts an object.  This didn't happen yesterday.

Instead, some hints at what happened are provided in the 0000 UTC sounding from yesterday afternoon.  Note how the dewpoint (green line) and temperature (red lines) meet near 700 mb and parallel each other to about 650 mb.  That is reflective of a shallow cloud layer.  At 650 mb, where the lines spread out again, is cloud top.  There, temperatures are just a bit higher than -10˚C.

When such clouds intersect the mountains, they can cause riming, but something happened yesterday to cause large droplets to form.  I think this occurred for two reasons.  First, the rate of change of temperature in the cloud layer is about 0.65˚C/100 meters.  In a cloud, that results in air parcels that are statically "neutral," meaning if you give them a push up or down, they can easily move further up or down.

This mechanism was first proposed as a contributor to precipitation enhancement by Bob Houze and Socorro Medina of the University of Washington based on data collected in the Cascade Mountains and European Alps.  Their conceptual model is shown below and highlights the turbulent, overturning cells in the shear layer.  Below the melting band, this leads to precipitation enhancement as droplets grow through collision and coalescence.  Above it, through the riming of snowflakes. 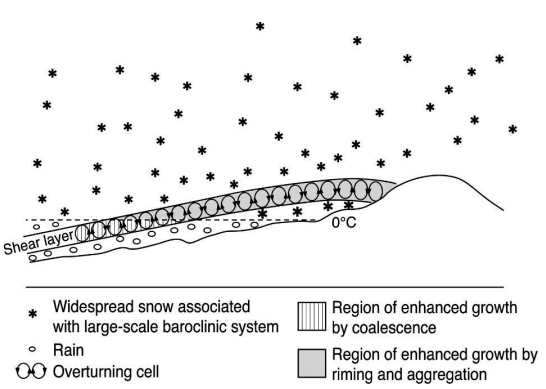 Their conceptual model assumes a deep cloud that is glaciated.  It appears that at some point yesterday we were dealing with a cloud that had a great deal of supercooled liquid water.  Thus, the turbulence and overturning led to large drizzle drops.

At least this is my hypothesis.  I wasn't out yesterday to observe the event.  Please share your observations in the comments and perhaps they will support the hypothesis or suggest revision.

One thing is for sure, that crust is supportive and it actually skied reasonably well on lower angle terrain.  It is also here to stay for a while.  It may be an issue for avalanche safety in the coming days or even weeks.
By Jim S Posted at 2/08/2020 04:18:00 PM

Email ThisBlogThis!Share to TwitterShare to FacebookShare to Pinterest
Labels: Rime