One of the more remarkable aspects of Utah's winter climate is that the snow on north aspects can often remain dry and powdery even when the air temperature is above 0˚C.

Today provided a great example as north aspects, at least where we were skiing, remained dry and powdery. 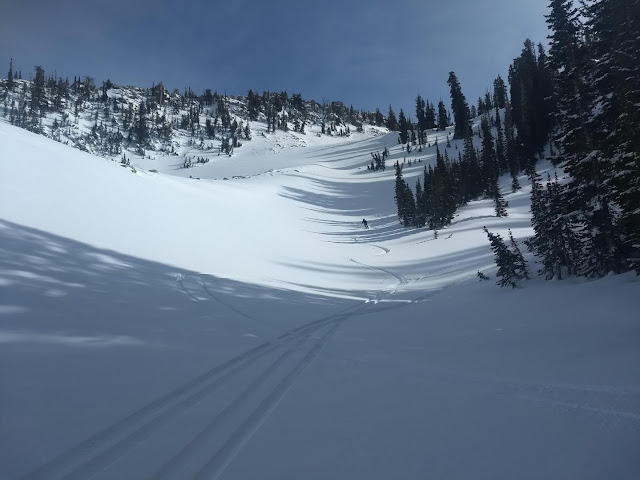 However, if you went into an area with more direct sun exposure, the snow was wet and in many cases really sticky.

The map below shows high temperatures for the day.  Every central Wasatch observing site recorded a high temperature at or above 32˚F (0˚C).  Nevertheless, high north was fine. 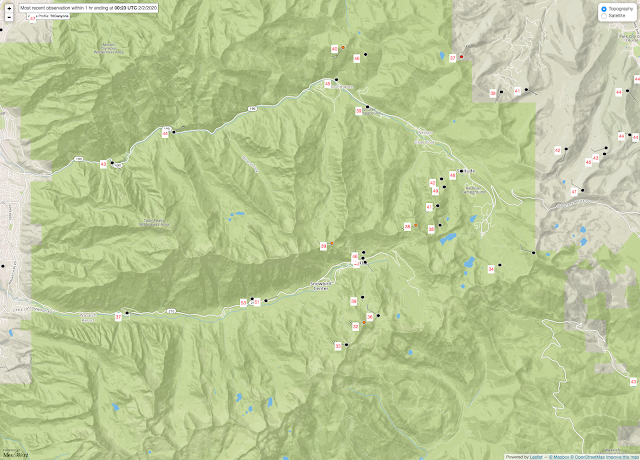 How can this be?  Well it turns out there there are many ways that energy is transferred to and from the snowpack.  One is the transfer between the atmosphere and snow.  Scientists call this sensible heat flux.  When air temperatures immediately above the snow surface are above 0˚C, there is a net transfer of heat to the snowpack.  If that were the only way the snow energy balance was affected it would lead to melt.  However, as show in the schematic below, other processes affect the snow energy balance. 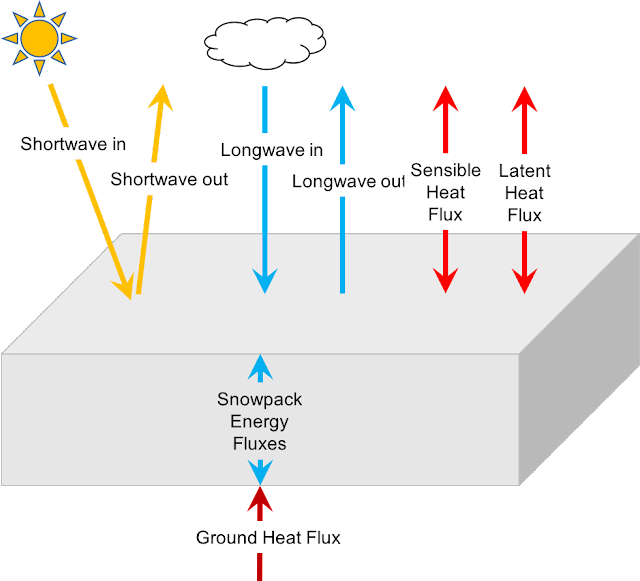 On a day like today, with a dry airmass in place, the snowpack was sublimating.  In other words, some of the ice was becoming water vapor.  The transfer of water vapor between the atmosphere and snowpack is called latent heat flux.  If sublimation is occurring, that flux leads to cooling and on a day like today it works against the sensible heat flux.

Finally, we have solar radiation, or what scientists sometimes refer to as shortwave.  Virtually all the shortwave radiation comes from the sun (the shortwave out depicted above is nearly entirely sunlight reflected back to space by the relatively white snow).  At night, it's not a player, but during the day, it is.  However, on a north aspect, the angle of the sun relative to the snow surface is very low.  The sunlight is distributed over a large area.  In early February on a day like today, there's just not enough to overwhelm the cooling influence of the net longwave radiation and latent heat flux.  As a result, the snow stays dry and powdery.

On other aspects, however, the sun is more direct, there is more energy input into the snow and the solar radiation can overwhelm the cooling effects of the net longwave radiation and latent heat flux.   Alternatively, as we creep later and later toward the warm season, the sun angle increases and solar radiation plays a bigger role on north aspects.

Note that the energy balance of the snowpack varies continuously and can be much different from what happened today.  For example, there are situations when incoming longwave is larger, such as when low clouds are present.  This can sometimes tilt the net energy balance to positive even when the sun angle is low.  Some people refer to this as "greenhousing" although I am not a fan of that term since greenhouses are warm primarily because they prevent mixing with the ambient atmosphere rather than their influence on the long-wave radiation.

When I lived in New York, such "snoweater" situations were common and they had disastrous effects on the snowpack, even at night.   You'd go to bed with several inches of snow on the ground and wake up to mud.  Horrible.  Be grateful such situations are comparatively rare in Utah.
By Jim S Posted at 2/01/2020 05:57:00 PM