A few tidbits today for your Sunday reading.

Is there a more spectacular near-urban wilderness in the contiguous United States as spectacular as the Lone Peak Wilderness?

It's a rugged place, with much of it more accessible in winter and spring than summer and fall.

Hard to believe there was talk at one time of putting a tram up the iconic Pfeifferhorn.  Thankfully that never happened.

One of the curious aspects of the central Wasatch Mountains is that the highest terrain isn't on the mountain "crest" or hydrologic divide like it is in the northern Wasatch, but west of it.  A good example of this is provided below, looking north from upper Red Pine Canyon at the high ridgeline above Little Cottonwood.  Note how the terrain is highest from Twin Peaks on the left (west) to Monte Cristo Peak center right, and then descends as one moves further east to the Emmas and environs above Alta.

I've often wondered what the ramifications of this topographic configuration are for winter storms.

Not Out of the Woods Yet

I've been hearing a lot about what a good snowpack we have and how this bodes well for the spring runoff, but as I've suggested in previous posts, we're not out of the woods yet.

It's important to recognize that we have some basins in central Utah that are running near or somewhat below median.  In other areas, many basins are above but not way above median. 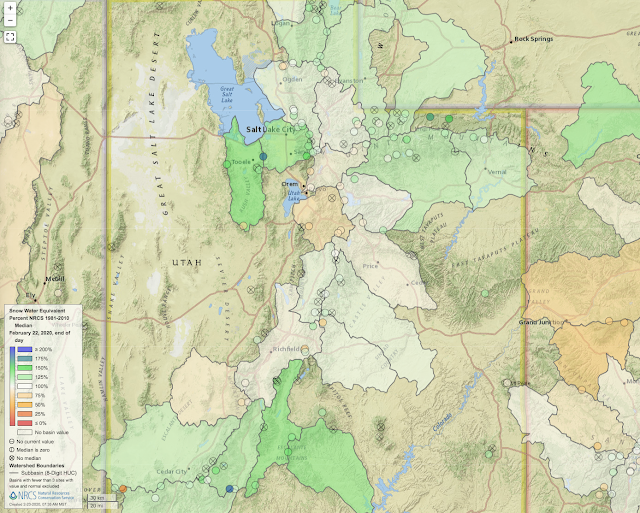 Additionally, it is only late February.  We still have one to two months of snow accumulation season left, depending on elevation.  Much is going to depend on the weather over the next 4 to 6 weeks.  Further, we live in a warmer climate now and while that does not prevent us from having a cold and snowy March and April, we need to recognize that the dice are becoming loaded in a way that we are going to see more springtime snowpack ablation (loss) events and less efficient runoff and reservoir recharge.  Thus, a near median snowpack in late February today doesn't provide as good of odds for a near average spring runoff as 40 years ago.
By Jim S Posted at 2/23/2020 07:46:00 AM