This is not the first upside down storm we've seen in these parts and it won't be the last.  In the upside down storm, snowfall totals on the benches (and sometimes valley) exceed those in the mountains.

Here are some observations from the eastern Salt Lake Valley from this morning:

As noted in an earlier post, the possibility of an upside down storm was anticipated by NWS forecasters. Here's there expected snowfall graphic issues yesterday afternoon at 3:58 PM.  12-18" on the Salt Lake City east bench, 4-6" at Alta, and 3-4" in Park City. 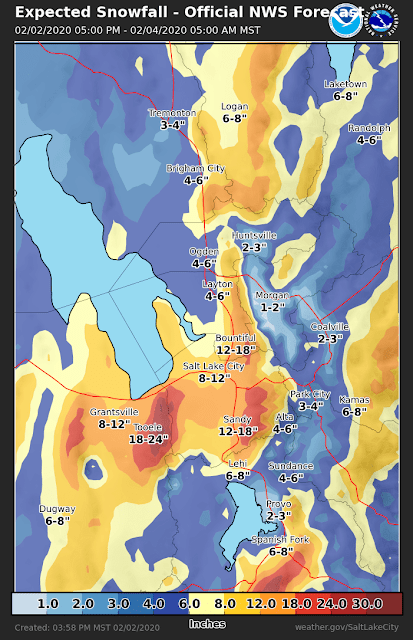 Kudos to them.  I was expecting a small contrast between the bench and the mountains, but not something that upside down.

On the other hand, if we look at longer lead-time forecasts, such as the one below from 03:01 AM yesterday, they don't go for as strong of an upside down pattern, with roughly equal amounts at Sandy and Alta.  The reality is that the processes that drive upside down events are quite sensitive to small changes in the large-scale flow and thus are hard to forecast with confidence at long lead time.  This makes it difficult to go all in at longer lead times.  Basically, their forecast evolved as more information came in and the lead time shortened. 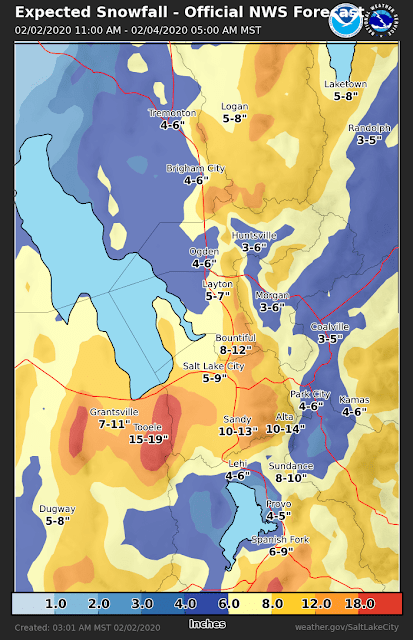 So, what made for this upside down storm?  Probably several factors.  As shown in the sounding below, the atmosphere was saturated or nearly saturated right down to the valley floor.  This is a remarkably moist sounding for Salt Lake City in northwesterly flow.  Second, the dendritic growth zone, which features temperatures between -18 and -12˚C, was located at and below crest level.  This favored the growth of low-density dendritic snow crystals below crest level and led to very large snow-to-liquid ratios — meaning a lot of snow from a small amount of water. 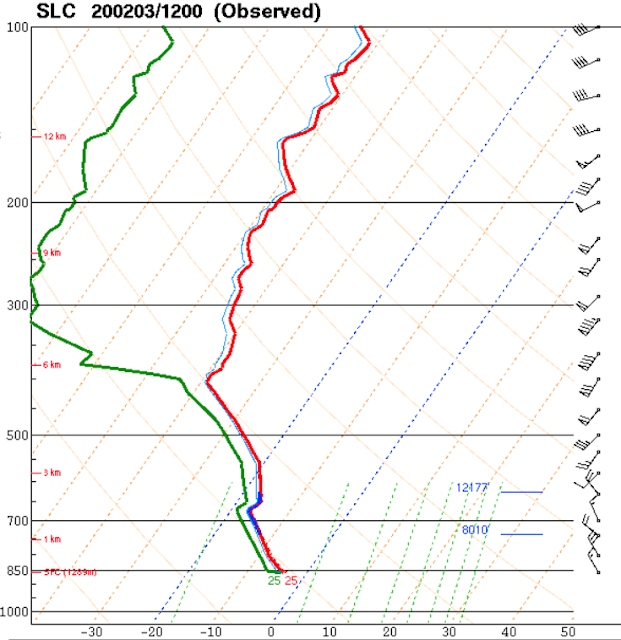 Potentially another player is the stable layer evident at about 680 mb, which is near or just above crest level.  Such a layer prevents the flow over the valley from simply rising over the mountains, so the orographic lift is weaker.

These sorts of upside down storms are common on the northern side of the Alps where they are known as "stau storms."  Google translator will tell you that stau is German for traffic jam, but meteorologically, stau storms are storms that feature stagnation and blocking on the windward side of the Alps.  This often leads to heavier precipitation in the Alps north of the Inn Valley and the foothills and foreland further upstream.  For more see our post from last year, Stau Storm.
By Jim S Posted at 2/03/2020 01:41:00 PM