Little Cottonwood is closed to the public today and Interlodge conditions remain in place this afternoon at Alta.

Observations from Alta Base show that yesterday afternoon they reached about 18˚F and after some cooling in the late afternoon, temperatues climbed overnight and this morning, reaching 28˚F by noon today.

Meanwhile, from 1700 MST yesterday through 1200 MST today, 13 inches of high density snow fell with a water content of about 1.26".  That represents a snow-to-liquid ratio of approximately 10:1, or about 10% water content.  In reality, the water contents may have been higher as the Alta-Collins precipitation gauge has been suffering from undercatch this season and thus may be underreporting the total water of the snowfall.  This is much higher density than the snow that fell on Monday and Wednesday. 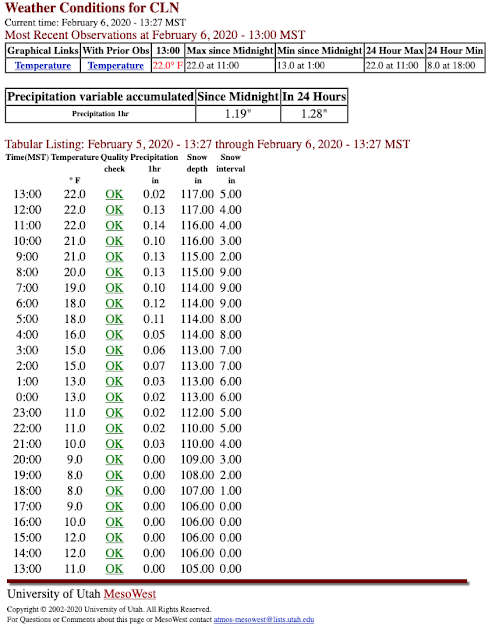 Water equivalent rates, which are especially important for avalanche conditions because they represent a better measure of weight added to the snowpack compared to snowfall amount, were expecially high and > 0.10 inches per hour from 0400 to 1200 MST.  Again, the reported values might be low.

The radar loop below covers the period from 0900 UTC (0200 MST) to 2019 UTC (1119 MST) this morning.  I've circled the high terrain around Little Cottonwood in red.  The highest returns in that area are ground clutter, but ignoring that, one can see the very persistent radar echoes in that area, consistent with the ground-based snowfall reports.

Finally there is the wind.  At Mount Baldy, sustained (red line) and gusts (green circles) have been climbing over the past two days and this morning gusts reached 80 mph.  Hidden Peak at Snowbird reported a gust of 100 mph as well.

Looking at the models, there appears to be no rest for the weary through Friday.  The time height section from the NAM shows deep moisture and northwesterly flow through late Friday when drier mid level air moves in and perhaps provides a break.

Yup, Mother Nature is playing dirty this week.  She's giving up mountain snow, but with high avalanche hazard and an upside down density profile.  It's not always the Greatest Snow on Earth around here.