NOAA has announced an upgrade to its computing resources for weather and climate prediction. 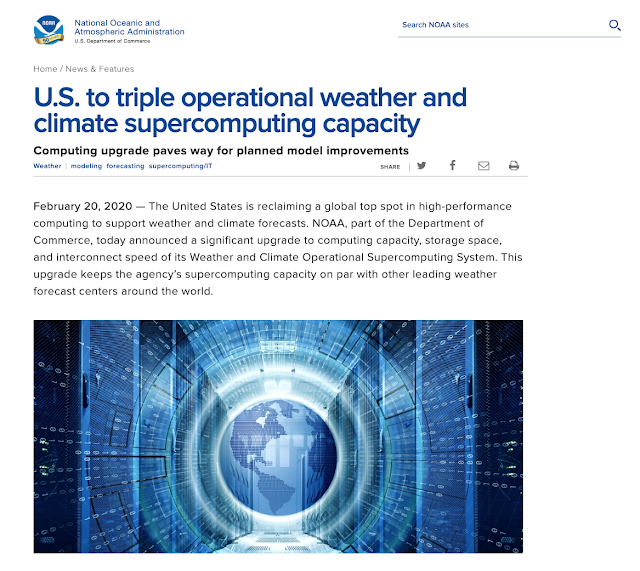 The full press release is available at https://www.noaa.gov/media-release/us-to-triple-operational-weather-and-climate-supercomputing-capacity.  The upgrade consists of two Cray computers, each with a capacity of 12 petaflops (typically two identical systems are used in weather computing to ensure redundancy and operational reliability).  A petaflop is one quadrillion floating-point operations per second.

The NOAA press release suggests that this will keep the agency on par with leading weather forecast centers around the world.  It will help, and it will lead to improved forecasting for the United States, but I'm not sure it will enable us to get on par with ECMWF, at least in terms of global weather prediction.  In January, the ECMWF signed a contract in January that is estimated to provide two computers, each estimated to have a capacity of 20 petaflops.  Given that the ECMWF focuses on global prediction (and runs fewer modeling systems), this will likely mean they will be able to dedicate more horsepower to their global forecast system.  Additionally, the UK is apparently spending $1.5 billion for a new supercomputer for weather and climate forecasting, although it's unclear how much of this will go to operational numerical weather prediction.

My view is that this is a positive step forward, but the US would benefit greatly from greater investment in computer infrastructure for operational numerical weather prediction.
By Jim S Posted at 2/21/2020 09:01:00 AM