The Bad and the Ugly

There is some good out there if you happen to be above the air pollution, but for the most part, the weather right now in the Salt Lake Valley is simply bad and ugly.

Below are observations from the Salt Lake City International Airport.  They are in "METAR" format, a sort of short hand for summarizing weather observations.  The first column in the station ID (in this case, KSLC), then the time (in UTC or "Z" time, then the wind direction and speed (ending in KT), and then the visibility and present weather.  Time increase from bottom to towp.  Note the transition from HZ (Haze) late yesterday to BCFG (patchy fog), and finally FZFG (freezing fog). 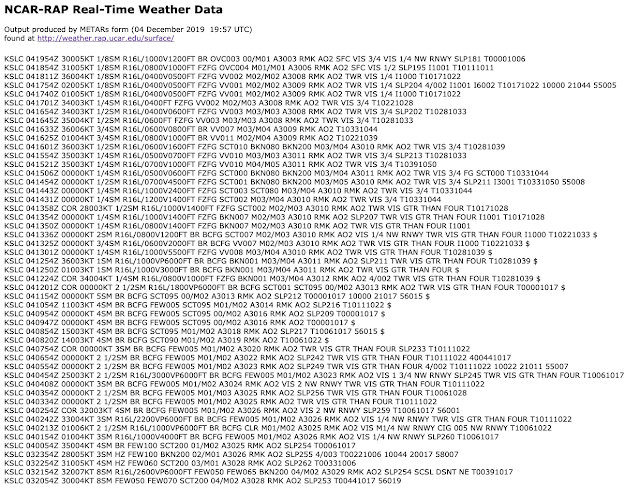 Thanks to the formation of fog, the temperature at the airport has gone practically nowhere today and sits presently at 32˚F.

Surface observations from Mesowest during the hour ending at 1952 UTC (1252 MST) show the incredible structure of the inversion in the Salt Lake Valley.  During that period, it was 32 at the Salt Lake City Airport, 37 at the University of Utah, and 42 at Mountain Dell in Parley's Canyon.

Air quality is awful.  Here's a view looking west from the University of Utah toward downtown.  I believe the official scientific terms is "gross."

PM2.5 concentrations show some short-term fluctuations, but also a long term trend toward higher and increasingly unhealthy values.  The DAQ sensor at Hawthorne Elementary at 700 East and 1700 South reached 58 ug/m3 yesterday for a 1-hour average (maroon line), which is in the "unhealthy" category and appears to be on its way there today.  the 24-hour average (blue line), which smooths out some of the variability, is currently 42.4 ug/m3.

Lower cost sensors sometimes give spuriously high readings when the humidity is high, but the sensor on the University of Utah's Browning Building is a high quality one that has eclipsed 100 ug/m3 twice today.  These are disturbing numbers well into the unhealthy range.

Where does all this pollution come from?  Us.  Large industrial emissions (i.e., point sources) are 13% of our PM2.5 emission sources.  The rest are mobile sources (cars, trucks, trains, aircraft), and area sources (smaller stationary sources such as home heating, smoke from wood burning, restaurant emissions, dry cleaners, etc.).

It's something akin to tragedy of the commons or death by 1000 cuts.  The beatings will continue until we change our ways and get serious, really serious, about clean energy, mass transit, and the like.
By Jim S Posted at 12/04/2019 01:35:00 PM