There's a lot to talk about this morning, so I'll go into rapid fire mode.

The new GFS model really handled last night's and today's event quite poorly. The 72 hour forecast valid at 1200 UTC (0500 MST) this morning called for precipitation to be confined to southern Utah, reaching no farther north than Provo.

Instead, the 1201 UTC radar imagery shows precipitation all the way into southern Idaho. 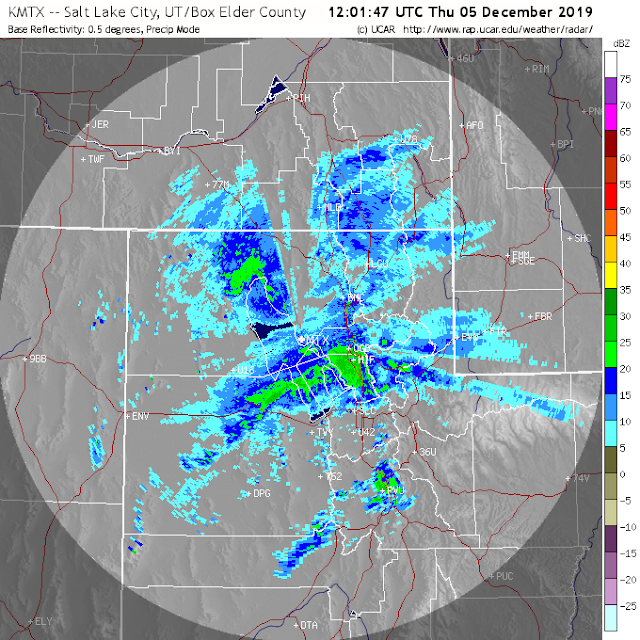 Although we can't share the Euro forecasts here, they definitely did better on location.

On the plus side, Alta-Collins has picked up 4 inches of snow, so maybe we shouldn't complain.

Freezing rain doesn't happen a lot around here, but there was a period of it last night at the airport where light to moderate freezing rain was reported from 10:04 PM to 12:25 AM when the precipitation changed to rain.  Freezing rain is rain that freezes upon contact with the ground or solid objects.  It can occur when the airmass aloft is above 0˚C, which results in the melting of precipitation falling form aloft, but there is a shallow layer near the ground below 0˚C or the ground is frozen.

This morning's sounding shows a deep layer from the surface to 780 mb (7000 ft) in which temperatures are at or just above freezing.  Snow falling from aloft in such a layer will begin to melt, transitioning to wet snow, slush, or rain.  Given that temperatures in the layer are barely above freezing, there can be a lot of variability spatially or with time in the precipitation type at the surface depending on the precipitation intensity and the size and type of snowflakes falling from aloft. 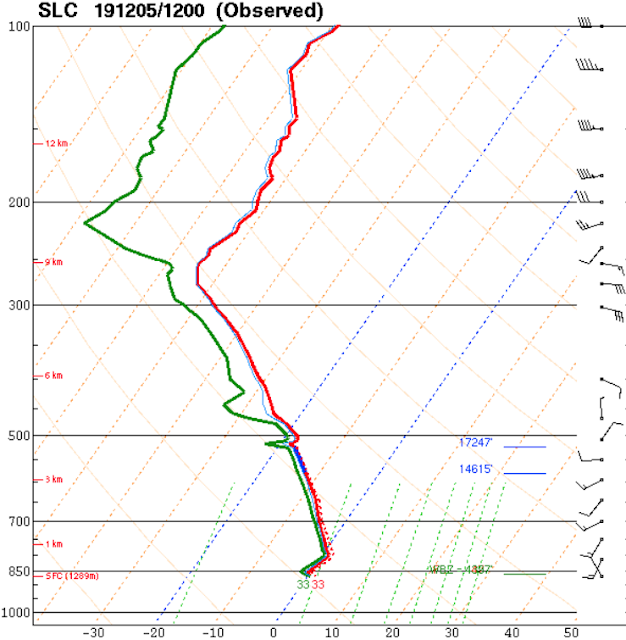 Overnight at the airport, precipitation fell as rain, but ground temperatures were apparently low enough for that precipitation to freeze on contact.

Although we've had some rain and the strength of the inversion has weakened some, PM2.5 levels remain in the "unhealthy for sensitive groups" category.  The DAQ sensor at Hawthorne Elementary peaked yesterday at 64 ug/m3.  At 7 AM this morning we've dropped to 41, which is still high.

Fog and low clouds are now blanketing much of the Salt Lake Valley.  Yeah, it's depressing.  Sadly, we're probably stuck with this through at least tomorrow, then we'll see what the new storm system does over the weekend.