A Partial Cold Pool Mix Out

Air quality has improved over the Salt Lake Valley the past two days, but is still in the moderate category in some areas.

Yesterday and overnight, the valley cold pool mixed out from the top down and from south to north.  This left a shallow lens of cold air over the northern Salt Lake Valley that was filled with fog and low clouds this morning.  A look at the photo below, taken looking south from the upper Aves just before sunrise, shows fog or valley stratus over the central Salt Lake Valley, but clear skies near and over the east bench around the University of Utah. 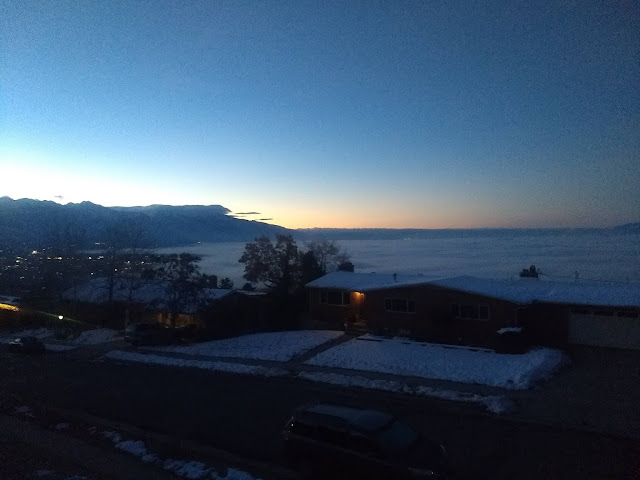 Observations at 7 AM show relatively mild air in the upper avenues (39˚F) and at the University of Utah (35˚F) compared to sites along I-15 from the I-215 junciont northward where temperatures were 28–30˚F.  Thus, the fog evident above was coincident with a shallow cold pool over the lower portion of the northern Salt Lake Valley.  Clear air near the University of Utah was also favored by downslope northeast flow.

By around 2 PM, the fog dissipated, but the cold pool remained, along with a thin lens of pollution.  Note that this pollution spread eastward into areas that were clearer this morning. 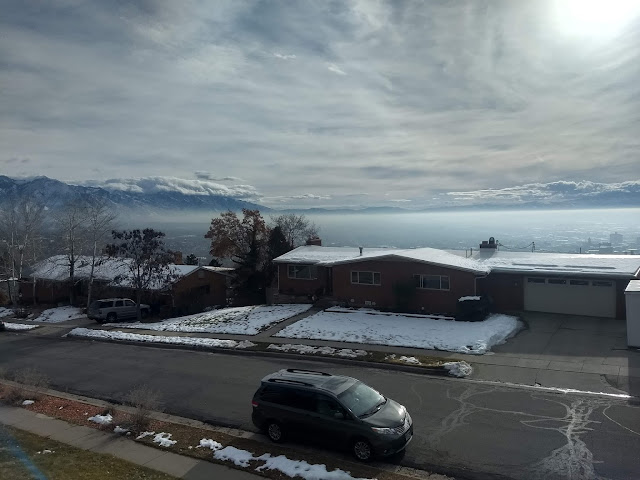 Observations within the hour ending at 2:38 PM showed a remarkable contrast in temperatures in the Salt Lake Valley.  To the south, near Bluffdale and Draper, it was in the 50s.  In the northwest Salt Lake Valley and Downtown, it was in the low-to-mid 30s.  Near the University of Utah, it was 49˚F, but the low level flow was westerly, so pollution was moving in.

The Trax-mounted PM2.5 sensors from the University of Utah show very nicely the pollution associated with the shallow lens of cold air over the northern Salt Lake Valley.  PM2.5 concentrations are < 2 ug/m3 near Herriman, but increase northward, reaching into the mid 20s near downtown Salt Lake City, solidly in the moderate category.

So, the good news is that the air quality is much better, especially in the southern Salt Lake Valley and along some bench areas.  The bad news is that there is still a shallow lens of cold air and pollution floating around with elevated PM2.5 levels.  Forecasts suggest that we'll probably mix out the rest of the cold pool tonight or tomorrow as temperatures cool aloft.
By Jim S Posted at 12/07/2019 02:48:00 PM