PurpleAir uses low-cost laser particle counters to estimate PM2.5 concentrations.  The sensors can be purchased and operated by anyone, with data available at purpleair.com.  Many groups and individuals have installed PurpleAir sensors across the Salt Lake Valley, northern Utah, and other parts of the nation (and even world).  In the Salt Lake Valley, there is a remarkably high density of stations.  Below is a PurpleAir map of PM2.5 concentrations from 7:09 AM MST this morning.  With such a high density of stations, one can see some of the spatial variability in pollution, including the relatively low values of PM2.5 on the east bench compared to the central and northwest valley. 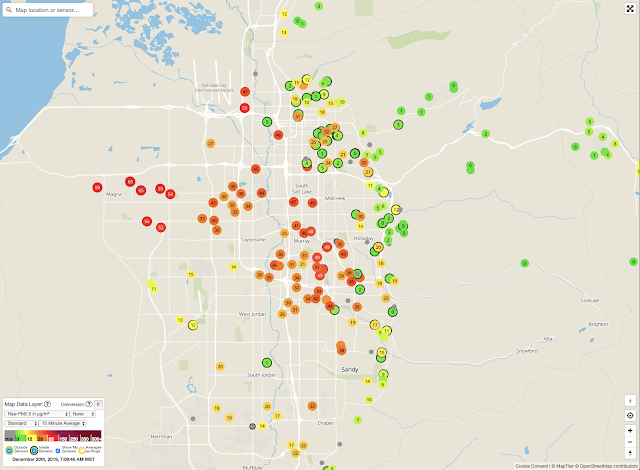 It should be noted, however, that while useful for examining the spatial patterns of pollution, PurpleAir sensors can have low absolute accuracy.  What this means is that while one can see that the east side has relatively clean air compared to the central and northwest valley in the map above, the actual values for PM2.5 concentrations may be off.  Kelly et al. (2017) examined the performance of PurpleAir sensors compared to research grade instruments and while they found good correlation, they also found that it overestimated particulate matter concentrations during cold air pools.  In other words, during what many Utahns refer to as inversions.  More recently, Tryner et al. (2020) also found PurpleAir sensors overestimated PM2.5  concentrations in the field.

Data from PurpleAir sensors is now being used on local news broadcasts and by the National Weather Service.  However, the limitations of these observations needs to be recognized.  Last night, the National Weather Service tweeted that air quality was in the red across much of the Wasatch Front, Tooele Valley, and Cache Valley.  In their tweet, they included maps with PurpleAir observations.


Current air quality in the Red (Unhealthy) category across much of the Wasatch Front, Tooele Valley and Cache Valley. Air quality should continue to deteriorate across valleys into tomorrow morning as the inversion lowers; benches should improve greatly for the AM. #utwx pic.twitter.com/JzoAXL8NTO
— NWS Salt Lake City (@NWSSaltLakeCity) December 20, 2019

Thus, DAQ sensors did not indicate PM2.5 concentrations were as high as indicated by PurpleAir and the tweet issued by the National Weather Service that air quality was in the red was not consistent with DAQ observations.

Finally, we could examine observations collected by the University of Utah on Trax Trains and at various sites in the valley.  Below is a map for the period from 6:29-7:29 AM this morning.  Again, values are lower than indicated by the PurpleAir sensors (compare with the first graphic in this post).

I think that the PurpleAir network is wonderful in the sense that it helps us to identify the spatial patterns of pollution, but it is important that their tendency to overestimate PM2.5 concentrations be recognized by those communicating with the public.
By Jim S Posted at 12/20/2019 08:04:00 AM