Yesterday I forecast that there would be no "major" storms in northern Utah the rest of the year, but some might be wondering what that means after the mess today in the central Wasatch.

For that post, I was thinking of major accumulations.  Impacts, however, can be significant even with light snowfall amounts.

For example, snowfall this afternoon apparently made quite a mess in the Cottonwoods, with UDOT hoisting the "Traction Law" flag and the National Weather Service noting that things look "pretty dicey" not only in Little Cottonwood but also Parley's Canyon.

The snowfall was produced by shallow cumulus clouds that were parked over the mountain ridges much of the day (e.g., see below).  I suspect a little surface heating from the sun, meager as it was, led to upslope flow and cumulus cloud initiation.  The precipitation-generating clouds were so localized and shallow that it was pretty much impossible to differentiate them from ground clutter in the radar imagery during the period.

I haven't seen any snowfall reports from the lower canyons, but Alta-Collins reported only an inch in the late afternoon, although this is a situation where accumulations may have been greater at lower elevations.   Feel free to share your observations, but for goodness sakes, keep it clean.

I haven't bothered going up into the Tri-Canyon area since in several days as part of my annual holiday-week exile.  It's not like the skiing elsewhere isn't good. 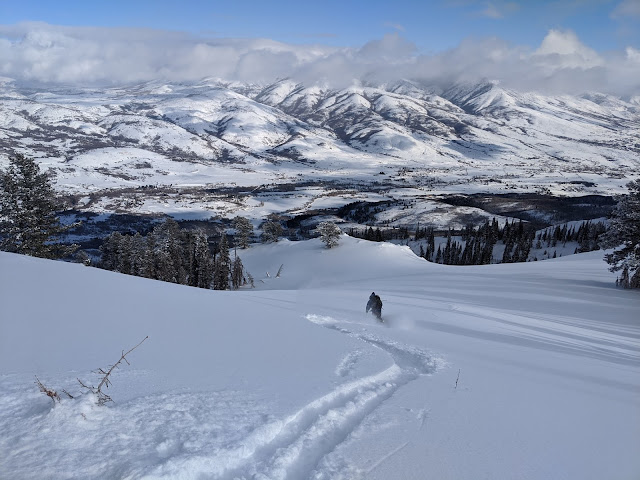 With the low angle sun and decent snowpack, much is skiable right now.  Further, the nordic tracks are also skiing well.  We are indeed blessed this holiday season!