Former Hurricane Rosa is now a tropical storm centered WSW of Bahía Tortugas, Baja California.  The National Hurricane Center track cone calls for Rosa to weaken further into a tropical depression as it tracks into western and central Arizona.

Consistent with the NHC position, the NAM forecast from this morning shows the 700-mb circulation center just WSW of Bahía Tortugas with a surge of moisture preceding the system extending northward into southern Arizona and the lower Colorado River Valley, as indicated by the precipitable water contours below.  Note how the southwesterly flow has brought relatively high precipitable water air into the four corners region ahead of the area of precipitation as delineated by radar observations. 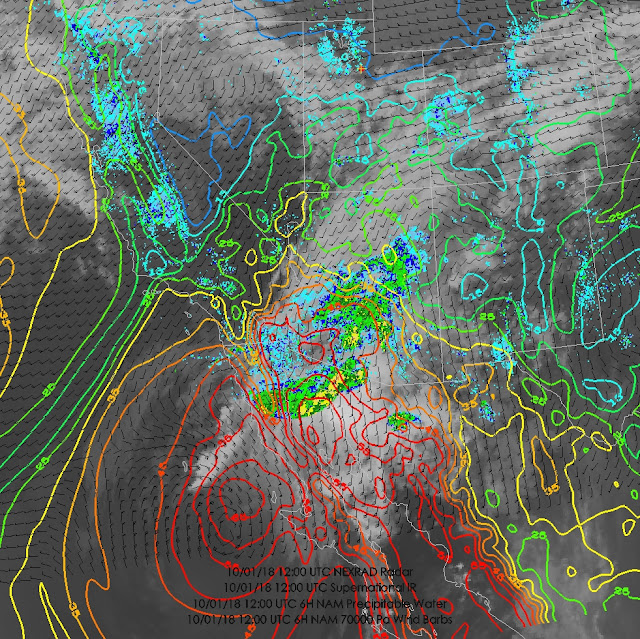 I've always been uncomfortable attributing these pre-tropical-storm surges to the tropical storm, although I recognize it is a relatively convenient thing to do.  In reality, the tropical storm is embedded in a relatively humid large-scale circulation that would have likely led to a surge of moisture into the southwest U.S. even in without the presence of the tropical storm.  Perhaps the public doesn't care about such semantics.

The greatest moisture and coverage of precipitation will likely affect the four corners region over the next two days due to the pre-Rosa moisture surge and the remnants of Rosa eventually tracking through the region.  Downscaled forecasts produced from the SREF show the greatest probability of two inches or greater of precipitation occuring over portions of Arizona and western Colorado.  Some potential for such heavy precipitation also exists in portions of Utah, but is more localized.

Those downscaled forecasts, however, do not account for localized convective storms, which might be a further concern.

For the Salt Lake Valley, the numbers being spit out by our downscalled SREF show accumulations through 1200 UTC (0600 MDT) Wednesday 3 October of anywhere from about 0.05 inches to 0.90 inches.

Basically, much is going to depend on the chaotic nature of this event and monsoon precipitation systems.  I wouldn't pick or choose any specific outcome for any given location at this stage in our part of the world as it really is a crap shoot how this will all come together.  Further, the potential for heavy precipitation in burn scar areas remains a very serious concern, as highlighted in the National Weather Service graphic below.

After Wednesday, the next several days look to bring some periods of precipitation and — wait for it — the models are even advertising a deep trough and below average temperatures over the region for the weekend.
By Jim S Posted at 10/01/2018 08:48:00 AM