Origins of the Phrase "Greatest Snow on Earth"

The print version of today's Salt Lake Tribune included a preview for the upcoming ski season.  It got me to thinking about a similar preview that was published a long time ago and introduced the world (or at least the region) to the phrase Greatest Snow on Earth.

I began by calling a friend, Dave Hanscom, who I met through our work for the 2002 Olympic Winter Games, is an author (With Alexis Kelner) of the Wasatch Tours Guide Books, and a legend in the Utah nordic skiing community.  I thought he could introduce me to Alexis, who wrote a great book on the history of Utah skiing in the 1980s, but Dave suggested someone else: Mike Korologos.

I had Mike's name in the back of my mind for several months thereafter as I continued to work on my book but procrastinated cold calling him.  In fact, I pretty much finished all but the first couple of paragraphs of the book when fate took hold.  I was at a function at the Natural History Museum of Utah.  There were about 1000 people there, but standing next to me was a man with a name tag that read "Mike Korologos."

I introduced myself, mentioned my book, and asked him if he knew the origins of the phrase.  He told me "yes, my brother came up with it."  I put that in quotes, but it captures the spirit of his comment as I cannot remember the exact words.

I was skeptical, so I Googled his brother, who looked fairly reputable.  He has his own wikipedia page, served as an ambassador to Belgium, worked for Senator Wallace Bennet, and worked closely with presidents and supreme court justices (for you youngsters out there, this used to be reputable work!).

He also began his career as a journalist with the Salt Lake Tribune.

Mike put me in touch with Tom who told me the story.  He was preparing the special pre-ski-season insert for the Salt Lake Tribune.  The circus was in town.  Specifically the Ringling Brothers and Barnum and Bailey Circus.  He thought, Greatest Show on Earth....Greatest Snow on Earth...and one thing led to another.  He wasn't sure when he first used the phrase for the insert, but it was in the late 1950s or 1960s.

I spent an hour or two each morning for the next week or two scrolling through the microfilm in the Marriott Library (also for you youngsters out there, microfilm and a microfilm viewer are the pdf and Google of the previous century).  I finally found it.  The first published used of the phrase Greatest Snow on Earth, in the December 4, 1960 Home insert for the Salt Lake City Tribune. 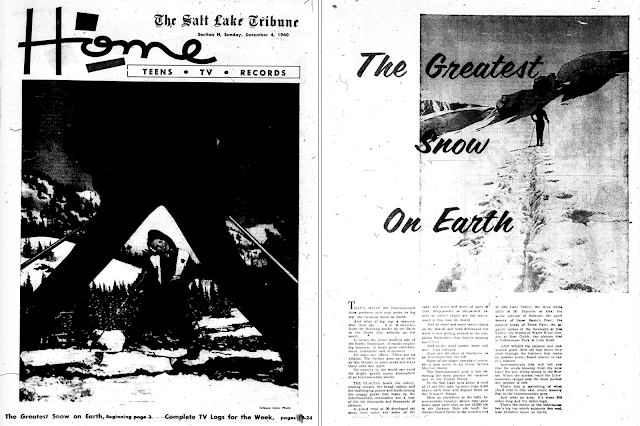 And with that, I was able to finish my book.

Subsequently, Greatest Snow on Earth was trademarked by the State of Utah, plastered on license plates, and became a remarkably successful outdoor slogan.  It has also spawned many myths, such as Utah snow being unusually dry, deserts drying out snow, etc.  Those topics are covered in greater depth in my book.

I'd like to take this moment to thank Dave Hanscom, Mike Korologos, and Tom Korologos for helping reveal the origins of the Greatest Snow on Earth.
By Jim S Posted at 10/26/2018 09:53:00 AM