Snow accumulations in the Wasatch Mountains are probably starting to give snow-safety professionals heartburn, especially considering the forecast.

Automated snow depth measurements at Alta Collins show 8 inches on the ground as of 6 AM MDT this morning.  At the Daybreak measurement site at 9250 feet above Canyons Village at PCMR, its up to 10 inches.  It's tough to say how much to trust these early automated snow depth sensors, and they may or not be representative, but given the persistent easterlies over the past couple of days, I would not be surprised if the upper-elevations of the Park City Ridgeline had a snow depth similar to that at comparable elevations in upper Little Cottonwood.  Certainly the camera at Crescent Ridge is looking snowy this morning.

Higher up, at the top of Collins, Alta is looking wintery. 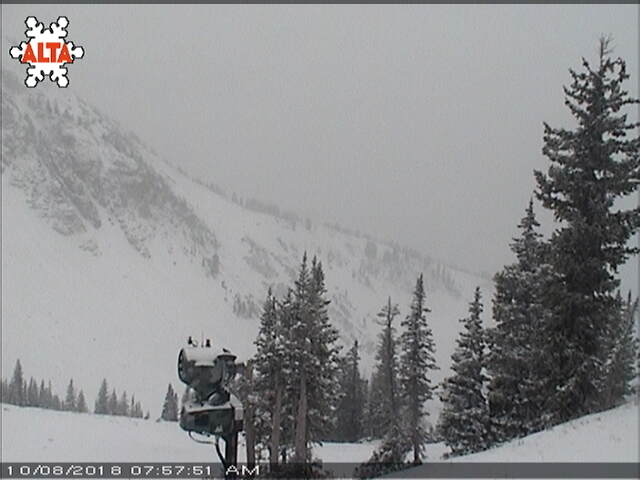 Will we get more?

Sure.  Perhaps a few more snow showers today in the central Wasatch, although accumulations will probably be less than an inch.  The next significant storm will be Tuesday night and Wednesday.  This shows up well in the middle of the SREF plume below.  Most members produce 0.2 to 0.5 inches of water equivalent for the event (about 2-6 inches of snow depending on density), but a few are more excited.

There is another system on the heels of that one for later in the week, although that may be more of a southern Utah event (but too soon to say with confidence).

My take on all this is that the odds favor continued Purgatory this week with snow depths being insufficient to really allow for skiing (I'm sure that won't stop some of you).  There's a chance that we do well in the two storms and I'll be out skiing by the weekend, but I'd say the odds of that are less than 20%.

A good question concerns what will happen to this snow after this week.  I don't like to look much past 7 days, but the models suggest drier weather, which means we may be stuck in Purgatory for a while.  A longer dry stretch will probably result in most of the snow on south aspects melting out, persistent muddy trail conditions in some melt-out areas, and lingering snow on shady north aspects.  Like I said, heartburn for snow-safety professionals.
By Jim S Posted at 10/08/2018 08:30:00 AM