Last Gasp of the Monsoon

There is no obvious end of the monsoon, although in the southwest U.S., it is sometimes defined to be 30 September.  The monsoon, however, is sometimes slow to die, or rises from the dead in October, which seems fitting for a month that ends with Halloween.

Contrary to conventional wisdom, which views monsoon as a heavy downpour, the word monsoon is typically defined based on a seasonal reversal of the wind and is now used broadly to describe large-scale circulation and precipitation changes that occur due to differential heating of land and ocean/sea surfaces.  In North America, the cool-season over the southwest U.S. and Mexico is characterized by predominantly westerly flow, but during the warm season, the development of upper-level ridging over North America leads to mean easterly flow that spreads northward from Mexico into the southwest U.S. from June to July.  This easterly flow is typically associated with increased moisture and precipitation, although both are modulated by disturbances in both the easterly flow and the westerly flow to the north.

The seasonal transition, however, is not necessarily abrupt, so monsoon-like patterns can persist or redevelop during the fall.  If we look at the large-scale pattern for 0300 UTC 21 October (9 PM MDT Saturday), for example, we see a pattern that is somewhat reminiscent of the monsoon with easterly and southeasterly flow at 700-mb (yellow vectors) extending from the Gulf of Mexico, across northern Mexico, and into the southwest U.S.  At the same time, a trough of low pressure off the California coast is aiding in the surge of high precipitable water air (color contours) into Arizona, Nevada, and Utah. 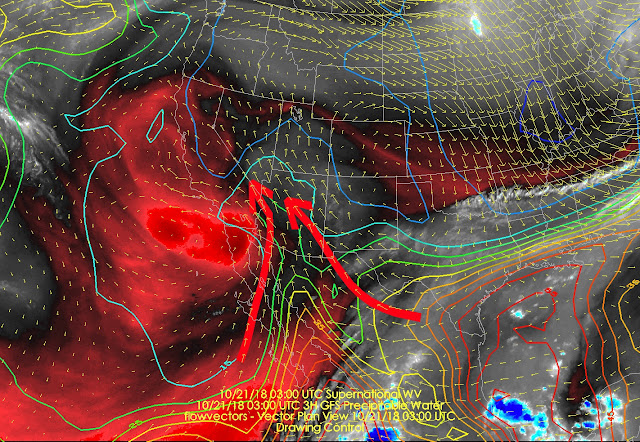 This morning, clouds and precipitation cover portions of southwest Utah, northwest Arizona, and southeast Nevada and are streaming northward into west-central Utah.

Precipitation is expected to reach northern Utah later today, as illustrated by the HRRR forecast for 0000 UTC (6 PM) this afternoon.

It will be worth keeping an eye on the sky later today if you have outdoor activities planned.  Showers and thunderstorms are possible.  Snow levels will be about 10000 feet during periods of light precipitation, but could lower temporarily if precipitation is heavy.
By Jim S Posted at 10/22/2018 07:53:00 AM