There's a little frost on the pumpkin this Halloween morning and, if you want something scary, talk of a dirty ridge.

There is no official definition of a dirty ridge, but it is typically used by meteorologists to describe situations in which clouds and precipitation are found on the downstream (typically eastern) side of long-wave upper-level ridges.  This might be viewed as a surprising place to find clouds and precipitation since the area downstream of an upper-level ridge is typically associated with fair weather.

Such a view, however, neglects to look at the entire weather picture.  Let us take the forecast dirty ridge as an example.  The situation this morning features an upper-level ridge centered west of California with an upper-level trough further upstream just east of the dateline (dashed line). 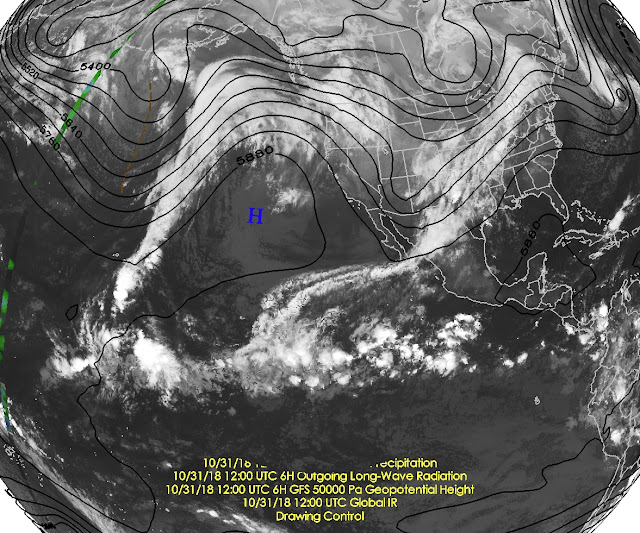 This wave behavior is a consequence of the Earth's rotation, which has a greater influence on long waves than short waves and results in long waves progressing downstream more slowly than short waves.  At the extreme, long waves become stationary or move upstream.  The latter is known as retrogression.

Critical for the ridge to be dirty are two factors.  The first is that there is a tongue of moisture laden air on the upstream side of the ridge at the beginning of the loop and ahead of the short-wave trough.  The color fill above is precipitation and you can see a band of precipitation that extends northward early in the loop and is associated with this moisture tongue.  The second is the existence of the short-wave trough, which provides the dynamics, or large-scale lifting, needed to generate clouds and precipitation on the downstream side of the ridge.  Note how the precipitation accompanies that trough as it moves inland across the Pacific Northwest.

There are sometimes other mechanisms that can generate "lift" on the downstream side of a ridge and these often are at play in dirty-ridge scenarios.  This is one reason why it is important for meteorologists to consult numerical model forecasts and think in terms of physical processes rather than relying exclusively on rules of thumb and simple pattern matching.  The assumption that fair weather will happen on the downstream side of a long-wave ridge is not always a good one.

The short-wave trough that I emphasized above is a concern for the forecast late Friday and Friday night.  We have a weaker dirty ridge scanario for later today, tonight, and tomorrow.  The plus side is that having some clouds around this evening should slow the temperature drop at and following sunset for the trick-or-treaters, although temperatures in the valley will still be in the 40s, and as things look now, it will be dry this evening.  Clouds will thicken and we could see some showers later tonight and tomorrow, with snow in the upper elevations.  Sadly, this is spitty kind of stuff and it probably won't add up to more than an inch or three, with the flakes tortured by strong winds.  This is a scenario where riming will probably also occur.