Looking Back at Michael

I never paid much attention to tropical meteorology until I moved to Utah and had to deal with the monsoon and occasional hurricane remnants.  Then my parents bought a house in Florida.  Hence, I take a peek south of 30ºN from time to time.

Hurricane Michael was easily the most impressive landfalling U.S. hurricane that I've ever observed.  My students and I followed it closely on Wednesday morning as it made landfall.  Meteorologists everywhere were watching it, and I highlight the women and men in the National Weather Service, including local forecast offices and the National Hurricane Center, who worked tirelessly to provide forecasts and updates for the public.

A National Hurricane Center Public Advisory as Michael made landfall near Mexico Beach reported that data from NOAA and Air Force Reserve Hurricane Hunter aircraft indicated that the maximum sustained winds were near 155 mph, which put it at the top end of category 4, with a central pressure of 919 mb.  I have seen a number of rankings of Micheal's intensity based on either wind or pressure or both and whether or not all US landfalling or just Florida landfalling hurricanes are included.  Phil Klotzbach, a research scientist at Colorado State University, provided a full summary for the Capital Weather Gang/Washington Post that you can access here.

The damage in Mexico Beach is catastrophic.  NOAA is doing aircraft overflights for imeagery that you can access here.  Below is a before and after comparison of a neighborhood in Mexico Beach. 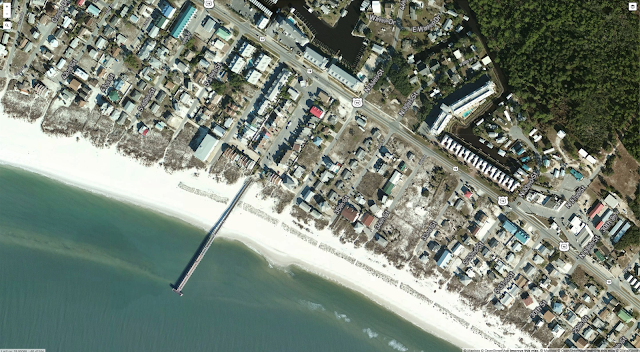 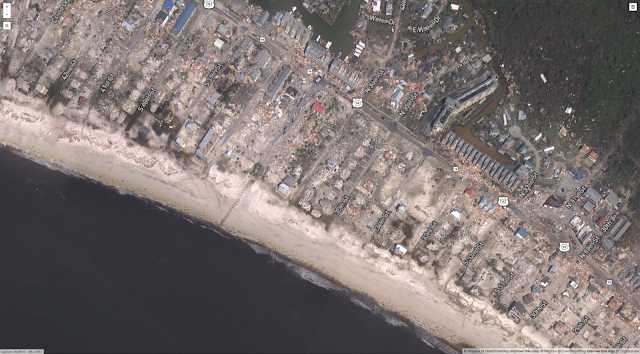 Those images illustrate just how damaging a category-4 eyewall can be.  I suspect the damage above reflects both wind and surge, although people with greater knowledge than I can provide a better assessment.

Data from Tyndall Air Force Base just to the east shows a remarkable drop in pressure (Altimiter Setting being used here due to some bad sea level pressure data that was transmitted, although the differences at 2 above sea level are small) from 1010 mb to 922 mb in less than 24 hours.  As the eye approached, the pressure dropped.  The actual minimum altimeter setting was 922.11 mb at 1220 CDT.  The pressure fell 52 mb in the hour leading up to that time.  That's about the equivalent change in pressure you would get in benign weather if you climb 500 meters (1640 feet) in elevation in an hour.

I hear people say frequently that they have been through hurricanes before and it wasn't that bad.  Often, that reflects the fact that they did not experience the full force of the hurricane eyewall, which is located very near the center of the storm.  Winds in a tropical cyclone increase as you approach the eye, and do so over a very short distance.  This can be seen in the remarkable ramp-up of wind speed at Tyndall Air Force Base where the maximum sustained winds of 86 mph and peak gust of 129 mph occurred at 1219 and 1221 CDT, respectively.  Just one hour earlier, at 1120 CDT, the winds were sustained at 45 mph, gusting to 61 mph.  Still healthy, but that illustrates that the worst of the winds in a hurricane are often confined to very near the low center.  Thus, experiences in other regions of the hurricane do not necessarily translate to "the worse," at least as far as peak winds are concerned.  Surge is often more complex.

Inevitably, and a cause of heartburn for me, are claims that forecasters were caught off guard.  The New York Times, for example, ran an article yesterday with the headline Why Hurricane Michaels Power Caught Forecasters Off Guard. 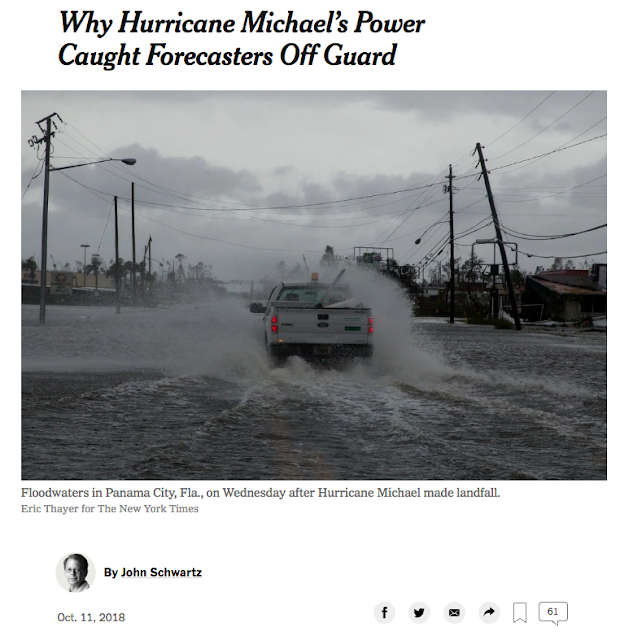 It is argued in the article that "millions of residents were caught of guard as Michael escalated from a tropical storm to a major hurricane in just two days, leaving little time for preparations."

Curiously, nobody interviewed in that article is a forecaster or involved in emergency management.

If one digs into the archives, you can find the following in the 4 AM CDT discussion issued by the National Hurricane Center at 4 AM CDT Monday October 8, more than 48 hours before landfall:

"This new official forecast brings the intensity to just below major hurricane strength in 48
hours, and since the storm will still be over water for a time between 48 and 72 hours, there is a real possibility that Michael will strengthen to a major hurricane before landfall.  Weakening is expected after landfall, but the system will likely maintain tropical storm strength after day 4 when it moves off the east coast of the United States."

The issue of hurricane intensification, especially prior to landfall, is a critical one that is of great interest to the science and forecasting community.  Precise predictions of intensity, especially at long lead times, pose serious challenges for a variety of reasons.  But the potential for a major hurricane was clear in the content issued by the National Hurricane Center.  Further, here is an interview of Florida Governor Rick Scott, given on the evening of October 9, stating that he has been traveling the state for 2 days asking people to get out.

For more on this, see Marshall Shepherd's article in Forbes An Open Letter Thanking The National Hurricane Center For Plenty Of Notice On Michael.
By Jim S Posted at 10/12/2018 08:45:00 AM