Looking Back and Looking Forward

Yesterday morning's HRRR forecasts were quite remarkable, correctly calling for the development and passage of an area of thunderstorms and heavy precipitation across northern Utah early last night (see previous post).

24-hour precipitation amounts reported to the National Weather Service, which also include some precipitation from the scattered thunderstorms yesterday, include two sites in the Great Salt Lake Desert that picked up over an inch of precipitation and were the big winners.  In the Salt Lake Valley, amounts ranged from about a quarter inch in the southwestern Valley to about 0.7 to 0.94 inches along the east bench.

Further south, Santaquin and Payson reported 0.32 and 0.37 inches, respectively.  Thankfully, that area and the nearby fire scars were spared the worst of the storm.

Yesterday afternoon's sounding from the Salt Lake City International Airport set an all-time high for precipitable water in October with 1.05 inches.  Precipitable water is a measure of the total water vapor content of the atmosphere, expressed as the depth of water should all that water vapor condense into liquid water.  The airport also observed a maximum temperature of 80ºF, nine degrees above average.

Things are going to change dramatically over the next few days, however.  The pattern yesterday morning featured an high amplitude pattern in the high latitudes, with a ridge centered just north of Alaska and a deep trough over central Canada.  The former has dominated the weather in Alaska for the past month, with the latter contributing to heavy snowfall in Calgary.  Utah has been under the influence of a moist southwesterly monsoonal flow. 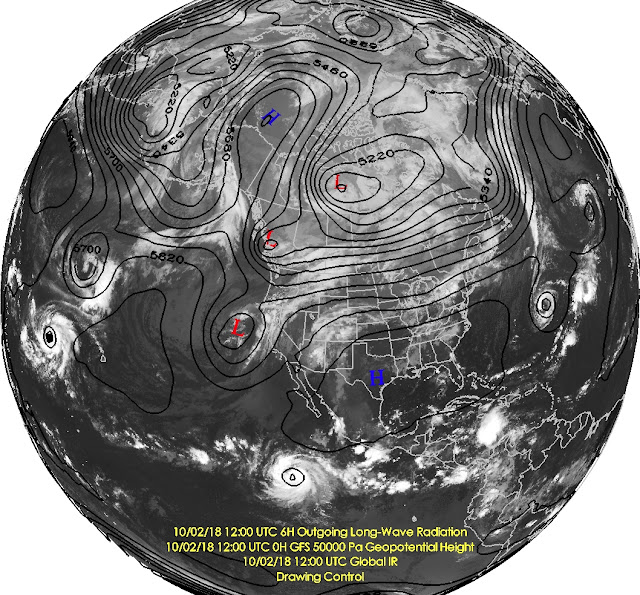 Major changes are going to be sparked, however, by Hurricane Walaka, located southwest of Hawaii in the analysis above, as it moves northward and interacts with an upper-level trough moving across the north Pacific.  Note in the loop below how this leads to rapid amplification of the downstream pattern (known as downstream development), with a ridge building over the northeast Pacific and a trough developing over the western United States, including Utah.

We will see white on the mountains, possibly as early as late Thursday night with the first frontal passage (probably no much), but certainly over the weekend, and the pattern looks cold into next week.  Still a wide range of possible outcomes for accumulations.  We'll take a look at this in a coming post.
By Jim S Posted at 10/03/2018 08:16:00 AM