Intricacies of the September Monsoon

We have reached the time of year during which the mid-latitude westerlies are strengthening and becoming more active yet the so-called "monsoon" remains active.  Knowledge of the interactions between these two circulation regimes is often important for weather forecasting not only over the southwest U.S., but other parts of the continental U.S., including the midwest.

An excellent example is provided by today's forecast.  The situation at 1200 UTC (6 AM MDT) this morning shows an upper-level short-wave trough in the mid-latitude westerlies just off the Pacific Coast.  At the same time, a tongue of monsoon moisture extends northward over the Gulf of California, with relatively high precipitable water values (color contours) across much of the surrounding region.  I have drawn an arrow below to indicate the flow that has led to enhanced precipitable water values along this tongue. 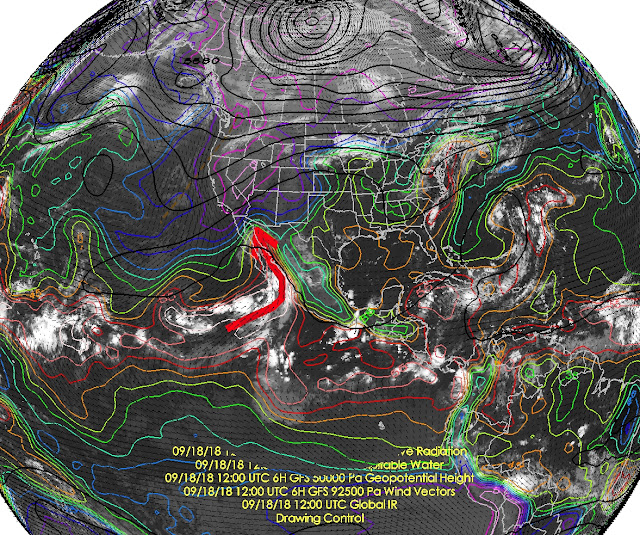 The latest GFS forecast shows how this moisture is drawn northward ahead of the upper-level trough as it moves eastward across the Rockies.  This contributes to a significant round of precipitation across the eastern Rockies and the upper plains beginning tomorrow.

Sadly, the phasing of the two systems is a bit off to bring precipitation to northwest Utah.  Most of the action is in eastern Utah and Colorado.  Instead, all we will see is a weak cold frontal passage accompanying the upper-level trough as it moves across the state.

This is shown well by the FV3 forecast below.  The FV3 is a new experimental model being developed by the Geophysical Fluid Dynamics Lab and the National Centers for Environmental Prediction.  It will eventually become NCEPs Global Forecast System (GFS) probably in early 2019, with the old core of the GFS relegated to the scrap heap.  Experimental forecasts are being produced this summer, with the first 84 hours available at weather.utah.edu.  Other web sites will have the full model run.

The FV3 forecast for 0300 UTC (9 PM MDT) tomorrow evening shows the trough over central Utah, with the wind shift just upstream of the Pole Canyon and Bald Mountain Fire regions (note: this is one model run and shouldn't be used in isolation to anticipate a wind shift at the fire location).  Precipitation is scattered across eastern Utah, Arizona, Colorado, and New Mexico.  Although there is a skiff of precipitation over high terrain in northwest Utah, as things stand now, it appears the western half of the state will be left bone dry.  The monsoon surge is close, but not close enough.

Should convection be just a bit west of that indicated above, however, outflow from either the storms to the east or "cumulus patheticus" accompanying the front could affect the fires.  Further, there will be a wind shift accompanying the front.  Situational awareness will be important tomorrow and tomorrow night to be prepared for the shifty situation.
By Jim S Posted at 9/18/2018 08:24:00 AM