The Devil Is in the Details (and the Uncertainty)

Hurricanes provide an incredible perspective on what Demuth and Morss (2012) called the creation and communication of risk information.

Most people today get risk information from a nebulous web of sources that can include radio and television media (local and national), social media (e.g., twitter and facebook), and friends and family.  This web of information is highly complex and strongly affects impressions of the risk information and ultimately individual decision making.

During hazardous weather events such as hurricanes, I often share information with family and friends via social media.  Over time, I have streamlined those posts to emphasize the forecasts produced by the National Weather Service, which includes the National Hurricane Center, and the importance of following information provided by local officials.  I realized that in many cases, adding my $0.02 about the evolving weather situation was just adding to the noise and obscuring the message.

I am a huge fan of twitter and as a professional I benefit greatly from following the feeds of many individuals in the atmospheric and related sciences.  The perspectives and information provided by those individuals can be quite valuable for me, and often provides ideas or content that I can use in class.

On the other hand, tweets are limited.  Even those produced by subject-matter experts often times lack context or fail to provide the big picture.  Often they discuss a scenario or a specific local outcome rather than the full range of scenarios.  This is especially true today when we have models that run out for many days into the future and provide very physically realistic (but not necessarily skillful) forecasts.

The forecasts produced by the National Weather Service are not perfect.  There are accuracy errors and communication shortcomings.  For example, the graphic at lower right includes a 1-7 day precipitation forecast that contains no illustration of uncertainty.  I have watched over the last 2 days as the position of the precipitation maximum has moved around with each new forecast.  We still do not know precisely where the heaviest precipitation will fall and that graphic conveys greater confidence than is warranted. 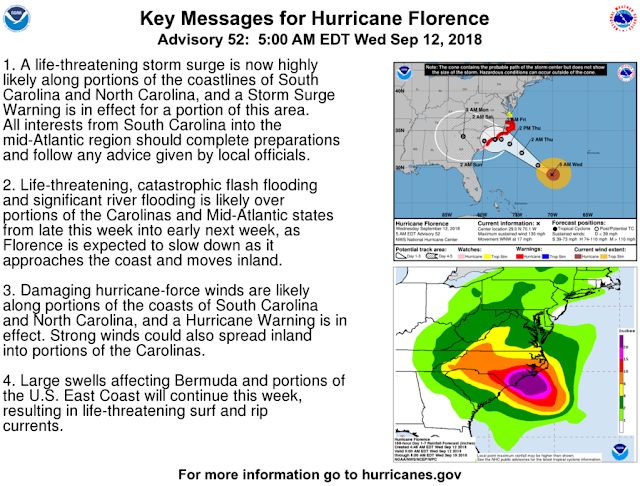 On the other hand, overall the National Weather Service forecasts are generally reliable and provide a steady but evolving perspective on very difficult forecast challenges.  For example, messages appeared on my phone stating that there had been a shift in the track of Florence, and I have heard that several times this morning as well.  If we go back to the track projected by the National Hurricane Center two days ago (issued 11 AM AST Monday), we that that the uncertainty cone beyond day 3 (stippled area) covers nearly all of South Carolina, North Carolina, and Virginia, as well as offshore areas.  That is the area that was likely to include the storm center on Friday and Saturday. 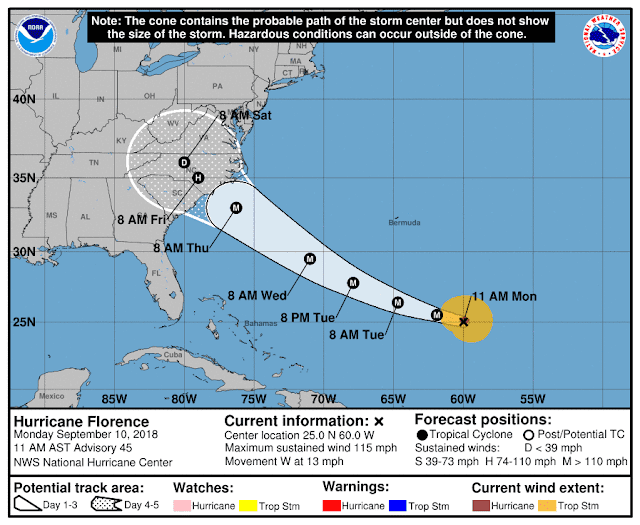 If we look at the forecast issued this morning, we see that on Friday and Saturday, the low center uncertainty cone covers northeast South Carolina, southeast North Carolina, and offshore areas (note that the stippled region is now valid for Sunday and early Monday). 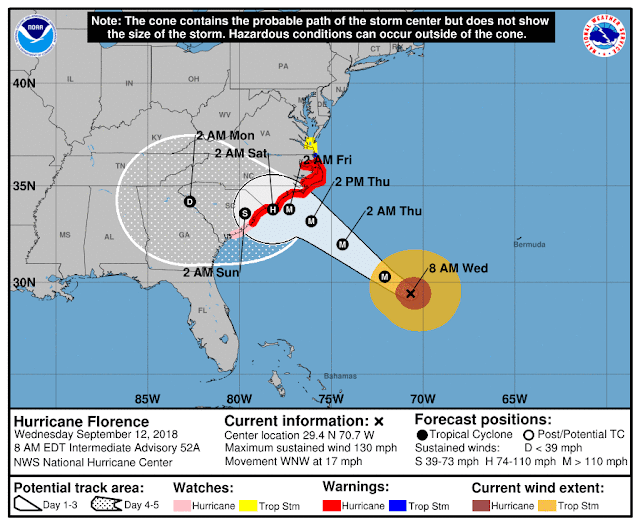 Ultimately, one shouldn't verify a forecast with a forecast, but the forecast position of the storm through Saturday remains in the probable path region projected by the National Hurricane Center.
Reflecting this uncertainty,  the "key messages" graphic issued by the National Hurricane Center at 5 AM AST Monday Sep 10, 2018, it explicitly states that "it is too soon to determine the exact timing, location, and magnitude of...impacts."  Further, South Carolina has consistently be mentioned in these key messages as an area of concern. 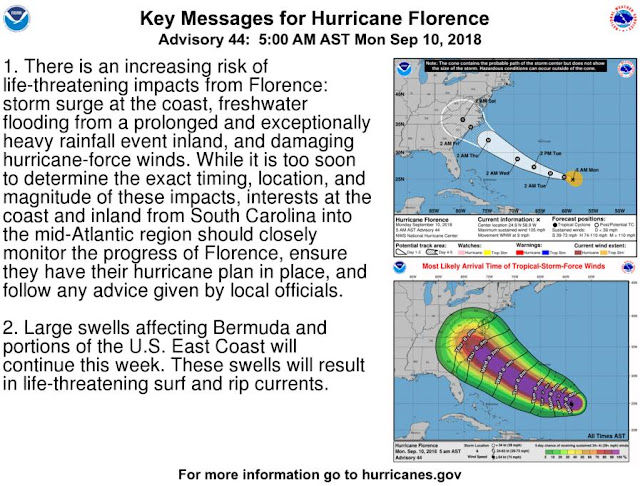 Every hurricane is different and provides learning opportunities about how to improve forecasting, messaging, and response.  My take away message from this post is that individual perspectives on the weather forecast are strongly weighted by the nebulous web from which we access and receive information.  Finding ways to reduce the noise and focus on what is important – official forecasts and the recommendations of local officials – is your best option.
By Jim S Posted at 9/12/2018 08:36:00 AM