Winds During the Pole Canyon Fire

As we have discussed in two previous posts and covered on local news, the Pole Creek and Bald Mountain Fires exploded last Wednesday (12 September) and have forced widespread evacuations.  The map below shows the situation as of yesterday morning, with the Bald Mountain fire to the west and the fire perimeter near Elk Ridge and Woodland Hill and the Pole Creek Fire having done damage on both sides of US-89. 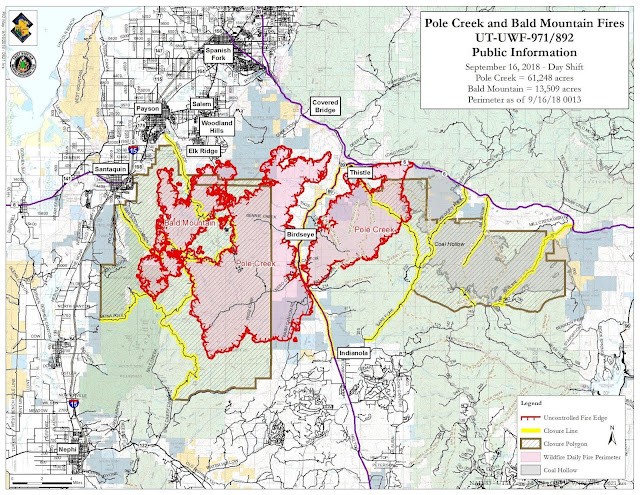 There is a paucity of wind data in the region surrounding the fire, so I need to get creative here.  We'll take a look at two sites.  The first is the Birds Eye "IRAWS" (incident remote automated weather station) at 6544 ft elevation in the mountains immediately east of Birdseye along US-89 (top graph below).  At this location, winds through the 10th of September exhibited a clear diurnal cycle, increasing during the day and decreasing at night (red line sustained, green pluses gusts, blue dots wind direction).  Sustained winds during the day, however, were less than 10 mph, and gusts through the 10th were less than 20 mph.


It was on the 11th and 12th that things began to change with persistent winds from the ESE-SW predominating and wind gusts each afternoon on the 11th, 12th, and 13th reaching over 20 mph.   It was on the 12th that news reports suggest the fires grew "exponentially."  There was a lull in the winds on the 14th and early on the 15th, but the srong southwesterlies remerged on the afternoon of the 15th and dominated yesterday as well.

The site above is at only 6500 feet elevation, so we might also look at what is happening higher up.  This is more difficult, as there are no upper-elevation sites in the immediate area, so I've plotted up the observations from the Arrowhead Summit site at Sundance Resort, which is at about 8200 feet (bottom graph above).  At that location, you can similarly see the daily wind effects until the afternoon of the 10th when steady SSW flow develops and then predominates until the present.  There is a clear ramp up of wind speeds from the 10th to early in the morning on the 13th, then the decline also seen at the Birds Eye IRAWS, and then things pick up again over the weekend.

The one plus recently is that the winds thus far today are weaker than they were over the weekend, and the area is not presently under a red flag warning, but only a fire weather watch.  Nevertheless, winds will pick up some today and fire conditions will still be difficult.

Model forecasts suggest that a shift in the winds will probably occur Wednesday or Wednesday night, depending on timing and elevation.  The NAM time-height below, which is for the Salt Lake City airport and thus shouldn't be used specifically for the conditions at the fire shows a shift in the flow occurring during the day on Wednesday first at lower elevations and then extending up to about 700 mb (roughly crest level).  This is associated with a very weak cold front that will bring in cooler air, but not substantially cooler air.

These fires and the impacts of Hurricane Florence over the past few days are a reminder that people are putting their lives on the lines to protect and rescue others.  My thoughts are with them and all who are working to minimize the effects of these hazards. 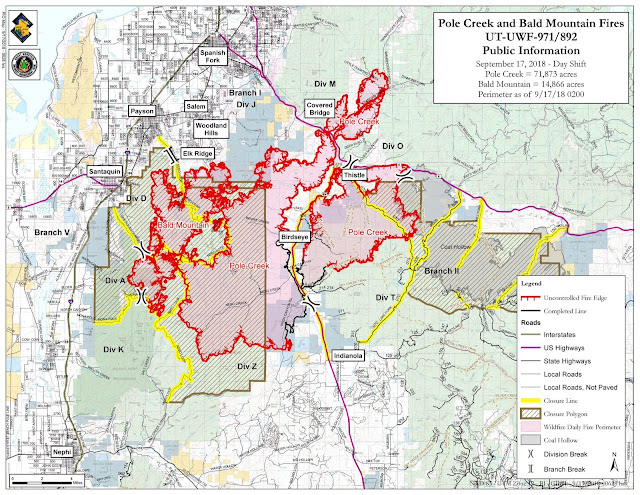