Today's 0600 UTC initialized GFS forecast, covering the period from 1800 UTC (1200 MDT) Thursday 27 September through 1200 UTC (0600 MDT) Tuesday 2 October is below and calls for a mid-latitude trough to interact with monsoon moisture and the remnants of Hurricane Rosa to bring precipitation into the southwest U.S., including Utah.

It is a very believable forecast.  You will almost surely see tweets of forecasts from this and other models with statements about what is likely to happen, but we need to remember that we are still 4 days from the initial arrival of forecast precipitation into Utah.  Further, uncertainty remains concerning the interaction of the mid-latitude trough and the hurricane, something that we discussed in the previous post.

The likelihood that the remnants of Rosa move across the southwest U.S. is now high, but not 100%.  Most tracks produced by the GEFS ensemble, for instance, bring the low center across Arizona, but there are two that shunt it off across New Mexico and two that keep it over the Pacific. 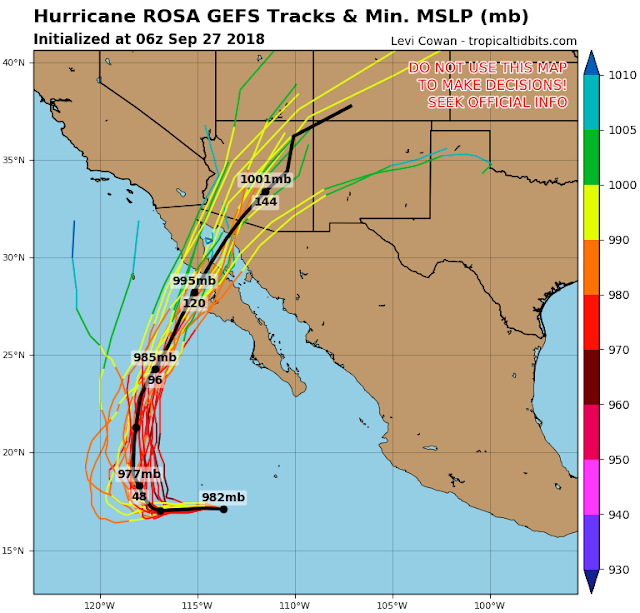 The European ensemble favors tracks somewhat further to the west (not shown, or I have to kill you), most going through western Arizona or southern California, but a few remaining out over the Pacific.

This, combined with other details of the moisture surge and the movement of the trough through the western U.S., yields large spread in the precipitation forecasts being produced by the GEFS and other ensembles.  In the case of the GEFS, total accumulated precipitation at the Salt Lake City airport through 0600 UTC (0000 MDT) 5 October varies from as little as .03" to as much as 1.87".  An ensemble like this does not resolve thunderstorms and other small scale features that might create further chaos for the distribution of precipitation.

If you think that is bad, check out the plume diagram for Yuma Arizona.  Note in particular the scale change.  There, total accumulated precipitation varies from .02 to 4.16 inches, most falling over about a 2-3 day period.

This is a situation in which we are going to see a pattern change.  It is likely that we will see some precipitation and that the rainfall could be significant and potentially hazardous in portions of the state, especially burn scars.  However, it is still too soon to anticipate local impacts with any reliability.  That will come eventually as the forecast lead time shortens.  Avoid letting specific predictions and single model solutions shared on social media and the like from biasing your perspective of this event.  There remain a wide range of possible outcomes for precipitation.
By Jim S Posted at 9/27/2018 09:24:00 AM