Rosa is currently a category 1 hurricane located over the eastern Pacific south of the Baja Peninsula.

Over the next several days, she is expected to drift toward the WNW and interact with a complex a complex sequence of mid-latitude troughs.  The latest (0600 UTC) GFS calls for Rosa to curve toward the northeast, with her remnants migrating through the interior U.S. southwest and eventually contributing to a very strong mid-latitude cyclogenesis event along the U.S. Canadian border.

The concerns associated with such a scenario are numerous, including the possibility of heavy rainfall on new burn scars (with related debris flows) and what would probably be some exciting weather for early October in the high plains of the U.S. and Canada.

The problem is this.  These sorts of interactions between tropical cyclones and mid-latitude troughs are notoriously tricky to forecast.  Yesterday, the European center model and ensembles favored a path for Rosa that basically took her westward.  In contrast, the GFS favored a solution similar to the one above.  Basically, you had model solutions that clustered around two tracks, one with a harmless route out to sea, the other with a route through the southwest.  This is known as a bifurcation and it is very common when tropical cyclones interact with midlatitude troughs and it yields dramatically different forecast outcomes.

The latest ensemble forecasts produced by the GEFS (top image below) favor a track through the southwest.  The European ensemble (bottom image below) has more spread.  Most go for the southwest solution, but there are others that go out to see or remain offshore.  These are from Brian Tang's Tropical Cyclone Guidance web site at the University at Albany. 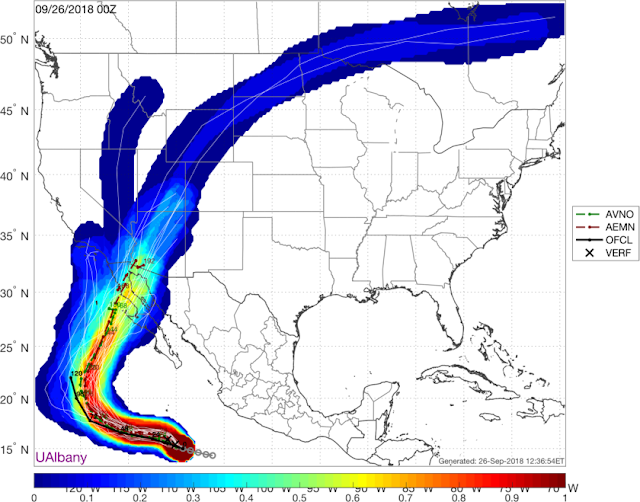 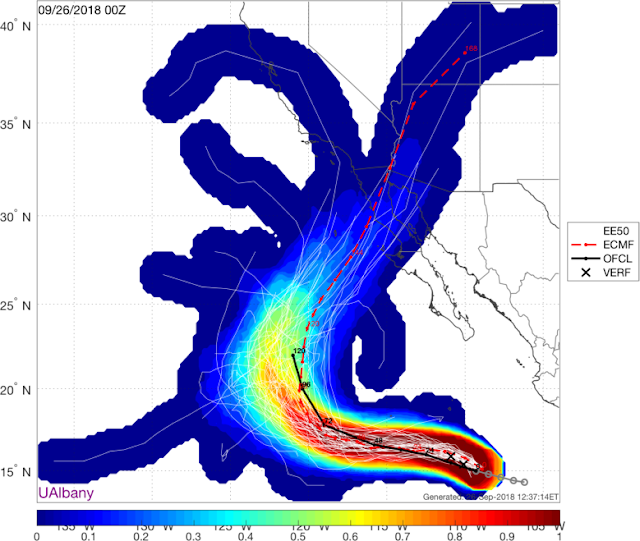 As things stand now, this is not a concern through the weekend except perhaps very near the U.S.–Mexico border.  Monsoon moisture would likely begin to move into the southwest in earnest late Sunday and early next week, with Rosa's remnants arriving Monday night at the border and moving through the southwest through Tuesday.

This is a forecast that bears watching, but regional and local impacts cannot be confidently predicted at this time and there are a wide range of possibilities. For Utah, the phasing between the midlatitude trough, Rosa, and monsoon moisture in advance of Rosa will ultimately determine what we see and where moisture affects the state.  This is a prime example of a situation in which a single model run (e.g., the GFS) provide very little useful guidance.  Ignore the icon based forecasts as well, although you should do that all the time anyway.
By Jim S Posted at 9/26/2018 11:05:00 AM