Some Perspectives on Florence

So many thoughts have been racing through my head over the past 24 hours or so since Florence began to have a major impact on the Carolinas and environs.  I will start with a quick look at the rainfall.

Radar estimated precipitation from 0343 EDT Wednesday 12 September through 0834 EDT Friday 14 September from the Morehead City radar shows a broad region of more than 3 inches extending from southwest of Wilmington to near Cape Hatteras along the North Carolina coast.   The heaviest precipitation has been in the region surrounding Morehead City, with some localized estimates of more than ten inches (magenta shading).

Gauge observations from a Remote Automated Weather Station (RAWS) site in Croatan National Forest northwest of Morehead City shows and accumulation of almost 11 inches, which is consistent with the radar estimates.  This precipitation falls over a roughly 12 hour period.

Precipitation frequency estimates from NOAA (https://hdsc.nws.noaa.gov/hdsc/pfds/pfds_map_cont.html?bkmrk) suggest such an accumulation has an average recurrence interval of about 1 in 100 years or, better put, a likelihood of about 1 in 100 in any given year. 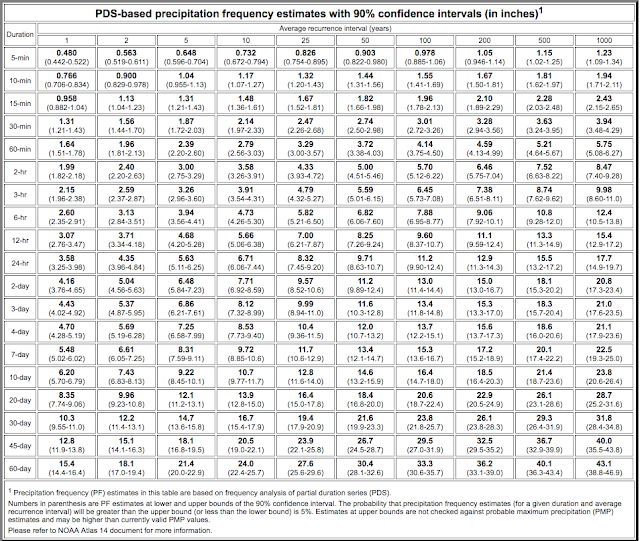 Estimates of such frequencies have a number of problems for extreme events, so I provide the numbers above merely to indicate that this is a great deal of precipitation, even for this part of the world.

Florence made landfall this morning near Wrightsville Beach, NC, but is moving very slowly.  It was category 1 at that time, but as we have discussed, do not fixate on category, which is based solely on maximum sustained winds.  Florence has winds that have and will do damage, but flooding associated with storm surge and heavy rain have been and remain the biggest threat.  The slow movement of the hurricane means accumulations will continue in much of the coastal Carolina region and eventually spread into South Carolina and then inland.  If in the region or watching for friends or family, monitor official forecasts and heed the advice of local officials.

As occurred during the landfall and subsequent stalling of Harvey last year, I had a dramatic change in emotions late yesterday.  As a meteorologist, you want to see the forecasts produced by your profession be accurate and helpful, but at the same time, one gets nauseous when you begin to realize that predictions of catastrophe are coming true.  Reports of 150 water rescues underway in New Bern were especially impactful as I thought of people in terrifying situations and the first responders putting their lives on the line to save them.  I am thinking of all this morning and hoping for the best.

Finally, nobody knows better than meteorologists that are forecasts are imperfect.  Sometimes they are not well communicated or the impacts cannot be fully described due other to uncertainty or incomplete knowledge.  However, there are important lessons to be learned from Harvey and Florence.  In particular, every hurricane is different and the past is not necessarily a good predictor of the future.  Past individual experiences during hurricanes and other hazardous weather events are not necessarily good indicators of how future events will unfold.  The sample size is simply too small and the climate system is changing.  Computer forecast models, which are based not on human experience but physics, including conservation of mass, energy, and momentum, combined with human interpretation may be imperfect, but provide the best guidance for decision making.  Something to keep in mind as predictions of future events unfold.
By Jim S Posted at 9/14/2018 08:18:00 AM