Spring Break Ain't What It Used to Be

Next week is spring break at the University of Utah.  The timing is perfect.  The terrain and climate of Utah lend itself to March adventuring, with the possibility of good skiing in the mountains if it is cold and snowy, or treks to southern Utah if it is sunny and warm.

Over the past couple of decades, however, the dice have become increasingly loaded to favor the latter.  There have been only four Marches since 1989 with a statewide average temperature below the 20th century (1901-2000) mean, and those months were barely below the average. 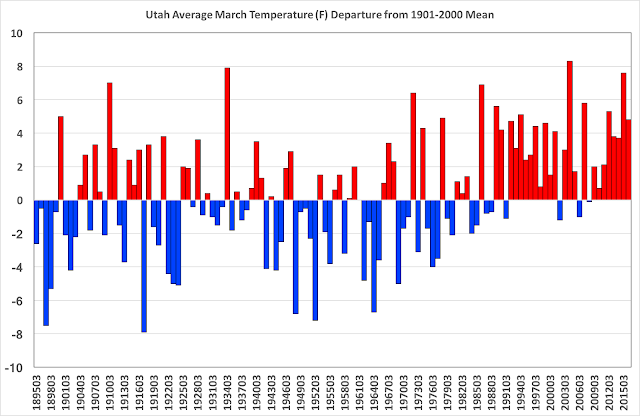 In fact, the average March temperature for the past 30 years (1987-2016) is 40.2ºF, 3.3ºF warmer than the previous 30 year period (1957-1986).  Given that the mean temperature from March 1st to April 1st increases about 8ºF, that's about the equivalent of moving Spring Break almost 2 weeks later into the year.  Basically, the weather of a mid-March Spring Break today is more like a late-March spring Break for your older professors when they were in college.  Basically, the odds of good powder skiing for spring break are declining and the odds of spring conditions are increasing.

Next week's Spring Break looks to be consistent with recent trends.  The GFS forecast below is valid for 6 PM MDT Monday and shows a high-amplitude ridge and associated warm weather parked firmly over the western U.S.  It certainly looks like Spring Break will get off to a warm start.

The latter part of spring break is far enough out that we'll have to see what happens, but my money is on the week ending up well above average for temperature and below average for precipitation.

If this continues, snow-loving students should lobby the University to move Spring Break to the last week of February or first week of March.  Those who want warmth can go to Ft. Lauderdale or Arizona like other college students!
By Jim S Posted at 3/09/2017 08:21:00 AM