What the Hell Is Going to Happen?

As we discussed yesterday, the pattern for today and tonight is one that poses a number of challenges for detailed forecasting in the Wasatch Range.  The basic problem is this.  We have a closed low developing over the Intermountain West and the position and intensity of the closed low development strongly influences the position and movement of the cold front that will push into northern Utah today, as well as the subsequent direction and intensity of the flow impinging on the Wasatch Mountains.  Mountain snowfall is strongly dependent on both of these factors, and thus there is a wide range of possible outcomes for storm totals through tomorrow.

Let's focus initially on the 0600 UTC initialized NAM forecast for 0000 UTC (1800 MDT) this afternoon.  At that time, the NAM calls for the closed low to be centered over southern Nevada.  There are two bands of precipitation over Utah, one over the central part of the state, the other over western Utah.  The latter is associated with the approaching cold front. 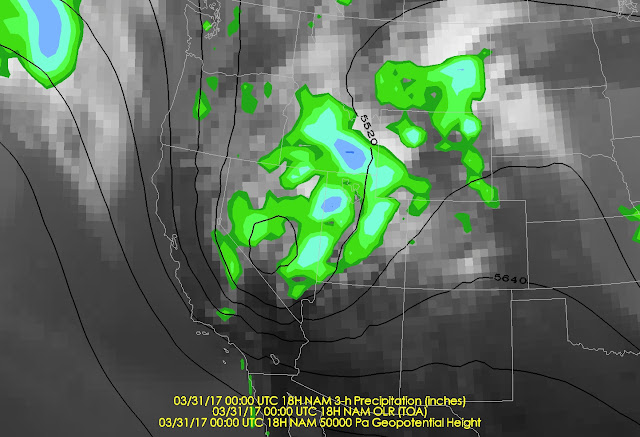 This model run then stalls the front right on the east bench.  The series of images below show the winds and three-hour accumulated precipitation that results overnight.  Note how the wind shift remains very near the Wasatch range (the northwesterlies stop penetrating eastward) and the bulk of the precipitation falls to the west of the Central Wasatch.

Depressed?  Well, I can tilt your emotions anyway I want if I cherry pick a different model.  The reason for this is that there is a great deal of sensitivity in the storm totals at any given location to the precise position, movement, and intensity of the closed low.  The diagram below is a "spaghetti diagram" and it shows the 5460 m 500-mb contour from all 21 members of the Short Range Ensemble Forecast System at 0000 UTC (1800 MDT) this afternoon.  There is good agreement on the low position, but disagreement on position, scale, and intensity, and there lies the rub.

So when we look at the downscaled SREF forecasts for Alta, we see a wide range of possible outcomes from about 0.35 inches of water to about 1.8 inches.  Most of the members, however, cluster between about 0.5 and 1 inch of water, which would likely translate to 5-10 inches of snow given the anticipated 10% water content.

The NCAR ensemble is a bit more optimistic.  Most members are between 1 and 1.5 inches, but a few go bigger than that.

My view of these forecasts is that things haven't changed all that much from yesterday.  Something in the 6-12 inch range lies in the "most likely" category, but the pattern and large spread produced by the ensembles means that the range of possible outcomes is fatter than that and fatter than the "average" Wasatch storm.  Of greatest concern is the possibility that the frontal band stalls and never quite makes it into the central Wasatch.  We saw an event like this only several days ago and it remains a possibility for later today and tonight.  Let's hope that doesn't happen.
By Jim S Posted at 3/30/2017 08:32:00 AM