Let's Get Back to April

The weather over the past week in northern Utah has been pretty outrageous.  Over the past 7 days, maximum temperatures at the Salt Lake City airport have been in the 70s and we will add an 8th today.  The overnight minimum last night was 61ºF, 6ºF warmer than the average high on this day.  We set daily records on four days and have a shot at another today (the current record is 74ºF).

Spring is a period of great weather variability so swings from one extreme to another are not unusual.  However, the past week blows everything previously observed completely out of the water.  For the March 14-20 period, we have averaged 60.9ºF, a full 4ºF warmer than the next highest March 14-20 period in 1910.

The records at mountain sites are less complete and do not extend back as far, but if we look at Alta, we see a similar story, although the gap relative to #2 (2007) is only 2ºF.

So, the past week has not only been warm, but it has been warmer than any comparable period in the instrumented record.

The impact of this warmth on the snowpack is staggering.  Significant losses in snowpack water equivalent have been observed at many SNOTELs.  Provided below are examples from Ben Lomond Trail (down 7 inches), Farmington Canyon (down 9 inches), and Mill-D North (Big Cottonwood Canyon, down 5 inches). 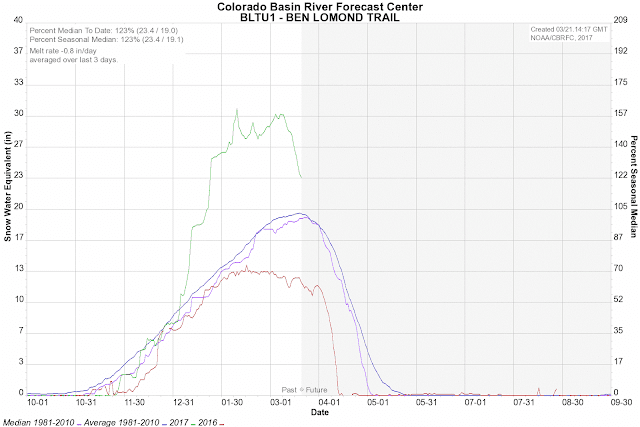 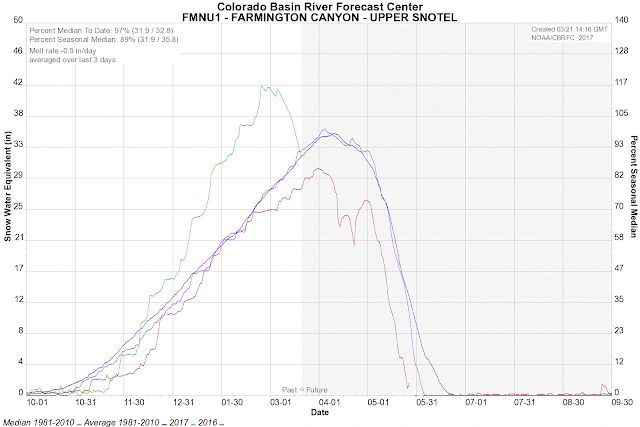 That drops each of these SNOTEL stations to near average for the date.

If you want a better story, you need to find a SNOTEL that is high and protected from the sun.  One example is Snowbird, where snowpack water equivalent has remained steady, illustrating the value of high-altitude north-facing terrain.

There's been a lot of talk about a "pattern change" and yes, it is going to cool off a bit after today with conditions more like early April through the weekend.  That means unsettled conditions, valley rain and mountain snow.  The hit and miss nature of precipitation during the period makes for a wide range of possible accumulations in the mountains.  For example, the spread in our downscaled Short-Range Ensemble Forecast (SREF) product is pretty ginormous through Friday afternoon (00Z/25) with the driest member generating under 0.1" and the wettest more than 1.6" of water equivalent at Alta.

Thus, this is indeed like April.  Good skiing will require a good dumpage and we're just going to have to wait and see if that happens and how quickly things add up.  The snow we do get is likely to be higher density, which is probably what we want at this stage.
By Jim S Posted at 3/21/2017 08:35:00 AM