Yesterday afternoon from noon to 1 PM MDT,  Alta was pounded with intense snowfall.  The automated Alta-Collins stations recorded 0.25 inches of water equivalent in that hour, and the interval snow-depth sensor reported an increase in snow depth of 7 inches. 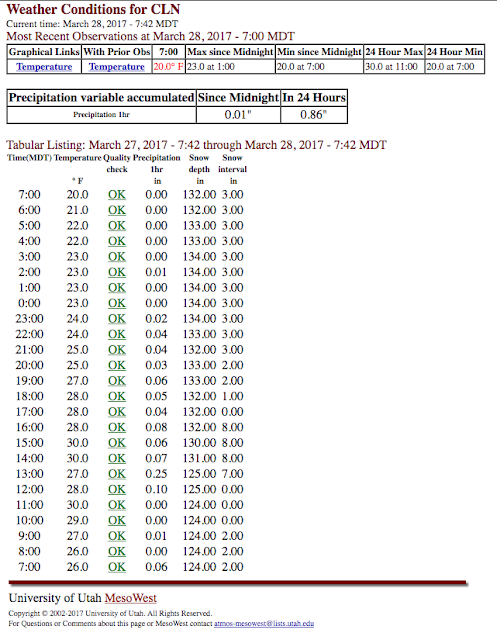 Due to round off errors and other issues, perhaps the 1-hour snowfall wasn't 7 inches, but something closer to six, which is what I've heard reports of from friends in the vicinity.

In any event, it sounds like a very intense snowfall period.  The question is why.

And the answer is that I don't know!

Nothing jumps out from the radar loop for the period (Alta identified roughly with a red box near the center of the frame).  There is a brief period with relatively high radar reflectivities (yellow color fill indicates >35 dBZ) that would be consistent with strong, localized snowfall, afterwhich the echoes are actually non-existent.

Often, there is a very poor correlation between snowfall rates and radar reflectivity in Little Cottonwood Canyon for a variety of reasons.  One is that the radar beam is partially blocked.  Another is that the snow growth can sometimes occur at low levels below the unblocked portion of the beam.  Thus, we get little insight into the intensity of yesterday's snow from the radar loop.

A curious aspect of the burst is that temperatures at the time were relatively high.  At Alta-Collins (9670 ft) it was about -2 to -3ºC.  The snow that fell, however, appears to be of low density (6 inches of snow with 0.25" of water equates to a water content of about 4%).  Thus, the snow was likely comprised primarily of dendrites and dendritic aggregates (dendrites that have stuck together).  In layman's terms, "goose feathers." Dendrites typically form at temperatures of -12 to -18ºC, which means the flakes formed at about 4000-5000 meters above sea level based on yesterday afternoon's sounding.  When I think back to lower density events at Alta, I think of shallower storms, but that does not appear to be the case yesterday.