The forecast for tomorrow and Friday is one that falls into my "interesting" category.

It's interesting primarily because it is one in which the large-scales are evolving rapidly.  Linear extrapolation from the west coast won't cut it in a storm like this.  It is only through the magic of numerical weather prediction that we can anticipate the rapid development of a closed low over the Intermountain west.

To highlight the remarkable change, let's first take a look at the situation at 1800 UTC (Noon MDT) today.  Utah is under the influence of a short-wave ridge (hence the beautiful blue skies), but further upstream, an upper-level trough lies over the eastern Pacific, with precipitation downstream over the Pacific Northwest. 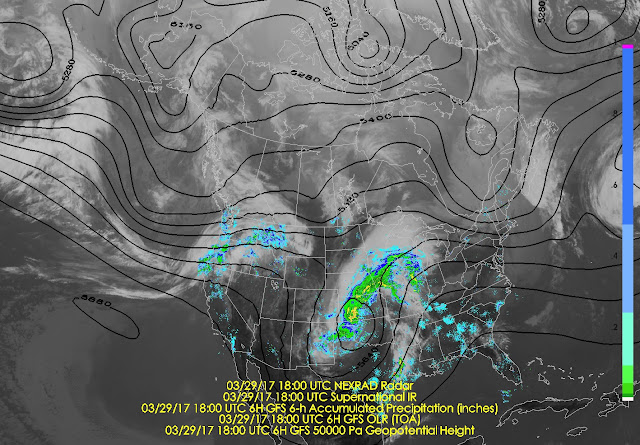 Presently, as evinced in the plot above, the trough is what we call open wave, because the height lines (and flow streamlines) do not close in a circle.

The models, however, forecast for the trough to undergo rapid development and close off over the Intermountain West, as illustrated by the GFS forecast below for 0600 UTC (0000 MDT) Friday. 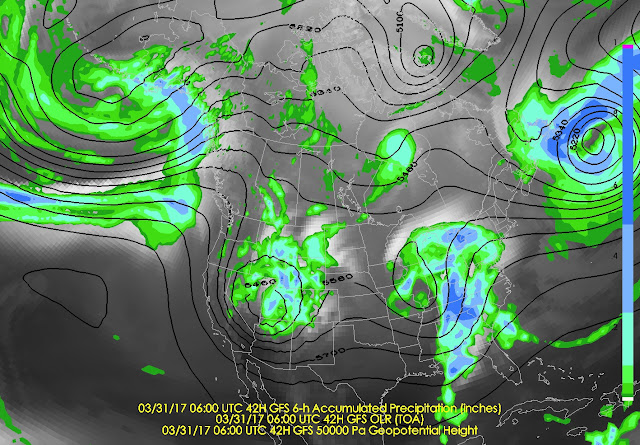 Currently, in advance of the trough, it appears we will see some periods of mountain snow developing tomorrow in moist south-southwesterly flow and then heavier snow with the cold frontal passage later in the day.

Numbers being put out right now by the 12-km NAM for Alta call for a couple of tenths of an inch of water equivalent in the moist southwesterly flow tomorrow, then very intense snowfall with a few tenths of an inch of water with the front around 6 PM, and then some additional precipitation in the wake of the front in the post-frontal and eventually "wrap around" phase as the trough moves downstream.  Total water is a bit over an inch.

As things stand now, I'm cautiously optimistic.  If current model forecasts hold, then a 6-12" dump with perhaps more if we're lucky seems likely by Friday morning.  I wouldn't call in sick yet though.  This is a dynamic situation, so let's see how the forecasts look tomorrow.
By Jim S Posted at 3/29/2017 01:18:00 PM