It's been quite a while since we had a storm like this, especially on the valleys and benches.  It's great to have winter as it should be.  A few thoughts on the event this morning.

How good were the forecasts?

Snow forecasting in northern Utah is all about synoptic possibilities and mesoscale uncertainties.  The former means that we can often anticipate when the large-scale ingredients for a significant storm are present, but the latter implies that the devil is in the detail and specific forecasts of the timing, intensity, and spatial distribution of the snowfall is exceedingly difficult.

For the present storm, we had strong agreement amongst the models and ensemble modeling systems that a significant storm would hit the state.  The NWS issued watches and warnings in a timely manner with good lead time.  The forecasts did not capture, however, some aspects of the snowfall timing, intensity, and distribution, most notably in some bench areas where the snow came harder and faster yesterday than anticipated, resulting in greater accumulations than forecast.  In addition, their briefing on Sunday afternoon suggested that the Salt Lake Valley may see less of an impact for the Monday morning commute (emphasis on may), although my small sample of Sunday evening news broadcasts didn't seem to give much of a hint of this. 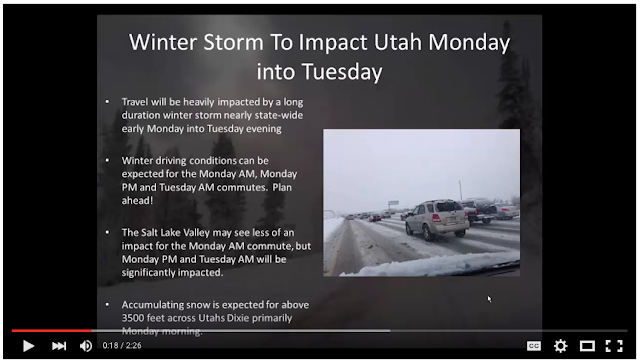 Forecast updates yesterday afternoon for last night also appear to have overdone the overnight accumulations, at least in the Salt Lake Valley.  Nevertheless, given the limitations of the science today, by and large the forecasts were generally good for this event.

Failure to prepare is preparing to fail

Yesterday morning's rush hour was a mess.  The first major storm of the year is always bad, but really this was the first major storm in two years, and it showed.  A few thoughts come to mind.  First, it appears we've forgotten what snow looks like.  Yes, that white stuff on the road really is snow and it does pay to slow down when driving on it.  Second, the bald tires we've been putting off replacing now for two years really don't work in the snow.  Finally, when our tires slip, it can be satisfying to push the accelerator all the way to the floor, but that really doesn't do any good.  Of course, these statements don't apply to any of us as I'm sure all readers of this blog were well prepared :-).

What surprised me most about this event was how unprepared the U and many school districts appeared to be.  Given the forecasts, I didn't expect that.  The contrast in the information feed from yesterday morning to this morning is quite large and suggests that everyone was at best out of practice and at worst simply did not take the forecasts seriously.  Yesterday I received no notices from the U during the morning rush hour and when I finally did get one, it came via a forwarded e-mail from our administrative assistant because the system was apparently overloaded.  Today, I've already received a notice concerning campus status.  Much better.  Ditto for West High where my children attend.  No info until late yesterday morning, but notices are flying in via text and voice mail today.

I do feel for those who have to provide these notices and make closure decisions.  Forecast reliability for these events isn't as high as we would like, and there are a significant number of false alarms for major snow events.  On the other hand, yesterday seemed like a case of being unprepared.  Hopefully we've gotten that out of our systems and we're ready to go for the rest of winter.

The enhancement of precipitation on the eastern benches of the Skull, Tooele, and Salt Lake Valleys (as well as the Bountiful Bench) was most impressive and produced precipitation rates (snowfall and water equivalent) that were much higher than observed in the higher mountains.  Although I have hypotheses for why this happens, I don't really understand why.  Further confusion is added by the overnight transition to higher precipitation rates at Alta-Collins, which (fortunately) yielded another 14 inches of snow and .45" of water after 6 PM. 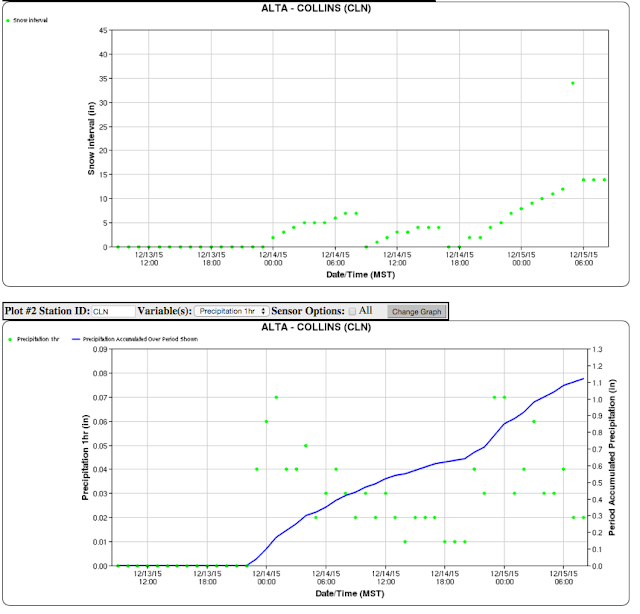 We don't understand these variations in orographic enhancement and we certainly can't forecast them.  Some of you people out there who are smarter than me should help us figure this out.
By Jim S Posted at 12/15/2015 08:30:00 AM