Should We Buy In to the Latest Forecasts?

Snowfall has been scarce in the central Wasatch so far this season and since mid-November Alta has reported only 13" of snow.   Storms that have looked good in the GFS at Day 7 have consistently fallen apart.  The latest GFS forecast looks enticing, but at issue is whether or not to get excited.

In the short-term, we have two brush-by systems that might bring a bit of snow to the mountains tonight and late Wednesday.  Emphasis is on a bit, but even an inch or two would help.  Then, the GFS is advertising a fairly significant pattern shift later in the week with a deep, digging trough pushing into the western U.S.  As currently advertised by the GFS, there's a healthy frontal passage late Thursday and then a series of weak troughs that give us some additional shots of precipitation in the post-frontal northwesterly flow.

Although past events have sometimes featured NAEFS ensemble members that have been fairly dry, all the members are giving us something decent (i.e., 1.5 inches or more of water at Alta Collins) during the 3.5 day period ending 0000 UTC 14 December, although there are differences in timing and intensity of the various snow periods. 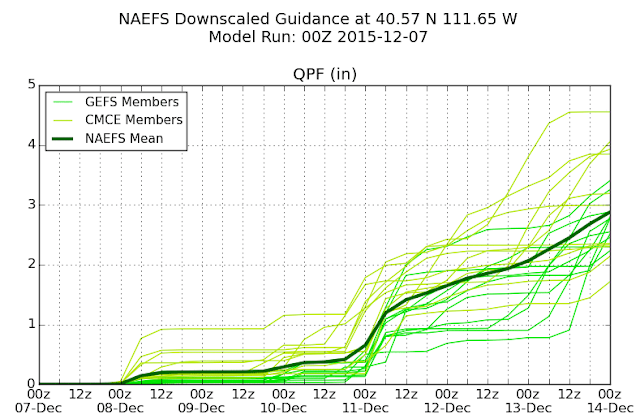 That's all fine and dandy, but I took a looksee at the 0000 UTC Euro and it gives us a decent frontal passage, but digs the trough further south and is far less excited about the post-frontal action.

Given that I've seen this movie a few times already this season, I'm hopeful we'll see something later this week, but am not yet buying into the optimistic GFS and NAEFS forecasts.  They are a possibility, but not a certainty, and I'd rather be a realistic pessimist and be pleasantly surprised than a realistic optimist and be disappointed.  Low expectations always yield better powder days.
By Jim S Posted at 12/07/2015 10:47:00 AM