Let's Get This On

I love mornings like this as I anticipate an approaching storm and peer out of my office at a cap cloud draped over Lone Peak. 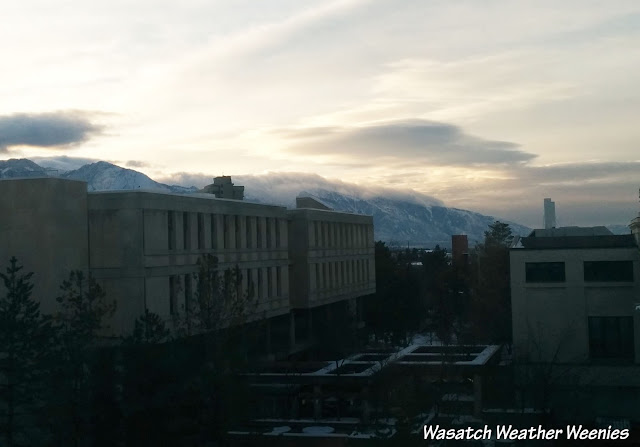 We had a pretty good storm last week, but that was a cold storm producing low density cold smoke.  This week's storm promises to be of the juicier variety.

This morning's 1200 UTC (0500 MST) analysis shows a potent atmospheric river, characterized by a tongue of high precipitable water (warm colors) extending from the sub-tropical west Pacific across the north Pacific. 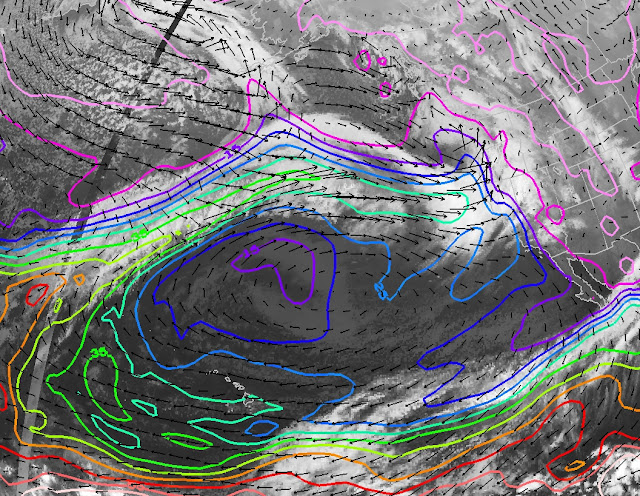 Atmospheric rivers typically decay rapidly as they move inland, so if you one to survive intact to Utah, it's best to start with a strong one on the coast and then to bring it inland through regions of low topography so that there's less water-vapor depletion over upstream mountain ranges.  Avoiding the southern high Sierra is essential, and the best option is to bring it across the comparatively low Sierra and Cascade crest of northern California and across northern Nevada and southern Idaho where the topography is less continuous and formidable.

The forecasts below are valid for this 0000 UTC (1700 MST) this afternoon and show the penetration of the atmospheric river through that hallowed weak terrain corridor and into northern Utah.  The area outlined by the red contour denotes integrated water vapor transport values exceeding those typically used for identifying atmospheric river conditions (i.e., 250 km/m/s).

Such values are not exceptional for northern Utah, but for the 3-week period centered on today, they have a return interval of about once per year and perhaps once every 5 years in the core of the atmospheric river.

The time-height section at Salt Lake City from this morning's NAM is unlike anything we've seen so far this season.  Note the deep layer of moisture from 1800 UTC Monday through 1800 UTC Tuesday.  The flow at low levels is southerly to southeasterly southwesterly, whereas at crest level the flow is initially southwesterly and transitions to WNW during the period.  There is also weak stability tonight.

Overall, this is a pattern in which the northern Wasatch should do fairly well and I'd expect to see some healthy totals from Ben Lomond Peak and Snowbasin.  The depth of the storm will also help with spillover to the Wasatch Back.  The westerly flow can sometimes be less favorable for the Cottonwoods, but this is a juicy enough storm that probably won't matter much.

The plots below are from the experimental high-resolution NCAR ensemble and are for the 24-hour period from 0000 UTC (1700 MST) yesterday through 0000 UTC (1700 MST) Tuesday, although most of the precipitation falls during the aforementioned 1800 UTC Monday through 1800 UTC Tuesday period.  Ensemble mean water totals are above 3 inches across most of the high terrain of the Wasatch.

Let's look at a few locations.  At Alta-Collins, water totals if we adjust for the small amounts last night, range from 2-3.5 inches through tomorrow afternoon.  Note that I think the storm is coming in a bit too late in this ensemble and is likely to get going in earnest earlier than suggested.

Ben Lomond Peak can often be a big winner in a pattern like this and the numbers there go a bit higher, including one member going for nearly 6 inches for the full 48-hour period.  The latest model runs shift the storm southward a bit more quickly, so I'm not sure we'll be able to get to those numbers, but Ben Lomond has a habit of going big quickly in storms like this.

And the base of Park City the model is going for 1.5 to 2.5 inches of water, which would be a godsend for them.

This will be a warm storm initially, but temperatures are low enough that all of the precipitation at these sites should fall as snow.

We don't know a lot about how the experimental NCAR ensemble biases, so at issue is how much should we believe these numbers.  For comparison, the 12-km NAM generates 2.21" of water at Alta-Collins from 1200 UTC (0500 MST) this morning through 0000 UTC (1700 MST) tomorrow, which is about as big of a number as you'll see that model generate.

If we look at long-term statistics for Alta-Collins, events that generate more than two inches of water in 24 hours (plot below based on observations from 4 am to 4 am) happen perhaps 3 times per year, but more than 3 inches of water are pretty exceptional (about once every 10 years based on the graph below).

So, let's put some numbers on this.  For the period beginning at 1200 UTC (0500 MST) this morning through 0000 UTC (1700 MST) tomorrow afternoon, let's go with 2-4 inches of water at upper elevations in the northern Wasatch and 1.5-3 inches in the central Wasatch.  There is potential for locally higher amounts.  These numbers are a bit lower than those generated by the NCAR ensemble, but I've seen that ensemble overgenerate precipitation in similar situations in the Pacific Northwest and am not certain there are enough ingredients here to go for an event that would be on the tail of the  climatological distribution.

Snow density will probably be high, especially today, bug decrease during the storm.  Something in the 1.5 to 3 foot range seems reasonable, with the potential for locally higher amounts.

Bottom line: Things look pretty good for a major event.  I've been hoping to sneak out for a ski tour Tuesday or Wednesday, but this is the kind of storm that will make steep terrain too dangerous and keeping momentum going on low-angle slopes difficult.  If we had a healthy snowpack, I'd be rooting for a smaller storm, but we don't, so bring it on.
By Jim S Posted at 12/21/2015 09:20:00 AM