A Real Winter Storm May Finally Be Coming

Note: The title of this post has been updated to fix a horrific grammatical gaffe!

Things played out last night pretty much as anticipated for the past few days with a decent round of frontal precipitation, but not much thereafter.  The upper Cottonwoods did the best with 4–7 inches.  I score this EC 1 GFS 0.

The possibility of snow showers at times will persist through the weekend, but accumulations in the mountains will be minimal.  The GFS was advertising a possible snow event for Sunday, but not surprisingly, it has now shifted to the drier EC solution.  It's too soon to say EC 2 GFS 0, but that's looking likely.

I am, however, getting enthused about what I am seeing for Sunday night and Monday, and this is probably the first time this season that I've said anything remotely like that.  The GFS is advertising a strong cold frontal passage Sunday night with a pretty good push of cold, moist, northwesterly flow in its wake.

Unlike previous storms, this one is taking a more northerly track at a lead time of only 60-72 hours, and, more importantly, the EC is actually calling for a similar track and frontal passage.  In difficult times, it's good to have the support of our European allies.

In addition, the downscaled NEAFS members are in fairly good agreement that this will be a more significant event than we've seen of late, and they uniformly generate a bit more than an inch of water (some more) from late Sunday through Monday. 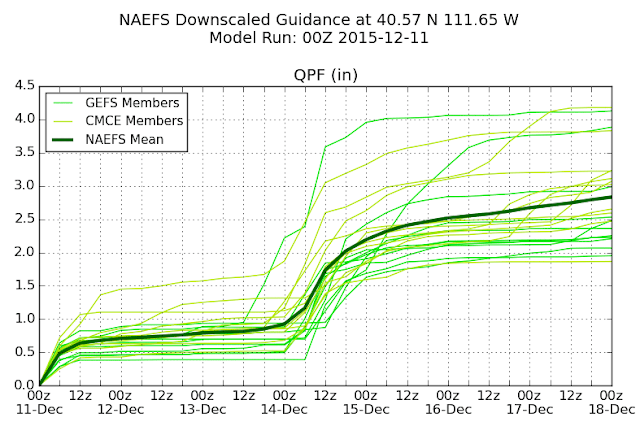 Finally, this will be a colder storm, so for northern Utah, it looks like it will affect all altitudes, including the valley, making it a "real" winter storm.  Snow to the valley floor?  Yes Virginia there is a Santa Claus! (No guarantees yet, however, for a white Christmas).

It's a quick moving system and too early to put numbers on it, and I still worry about the system going south (literally and figuratively), but it's looking fairly likely that we'll have at least some snow at all elevations, with a decent chance that the mountains may do a bit better than they have done in storms the past couple of weeks, especially if we can get something going behind the front.  Keep your fingers crossed.
By Jim S Posted at 12/11/2015 09:49:00 AM