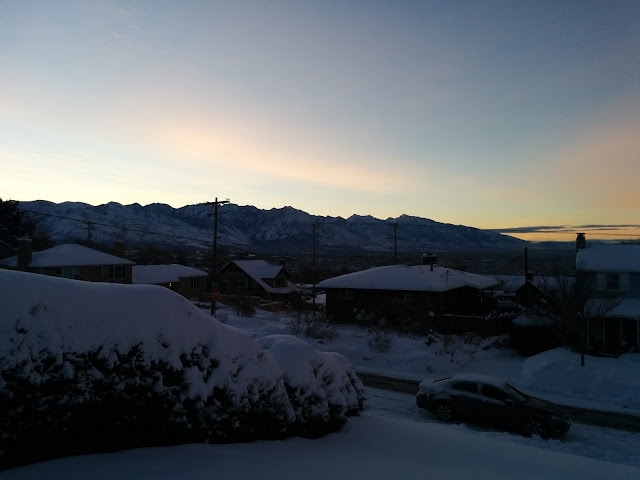 Clouds are quickly returning this morning over the Salt Lake Valley, but as is evident in the photo above, it was a bluebird sunrise that ignites a skier's soul this morning.  Winter has finally returned to northern Utah.

Although it took a little while to get going with the benches picking up more snow on Monday, the Little Cottonwood snowmaking machine has been going full bore since Monday night with another 12" falling overnight.  That brings their storm total to 46 inches of cold smoke.  The water content of that snow was only 1.9", yielding a mean water content of only 4.1%.  Thus, that 46" won't go as far as you think for base building, but have no fear, because more snow is coming....

Readers of this blog know I don't like to hang my hat on detailed, specific, medium-range forecasts, but by and large, it looks pretty good that after a bit of a break through Saturday (other than perhaps some snow showers tonight), we're going to see the snows return later in the weekend and early next week.  There are differences in the timing and intensity, but all members of our downscaled NAEFS ensemble are generating more than 2.5 inches of water equivalent through 0000 UTC 24 December at Alta-Collins.  I'm not sure whether or not to believe the high numbers being projected, but it's quite likely that we're going to add to the snowpack. 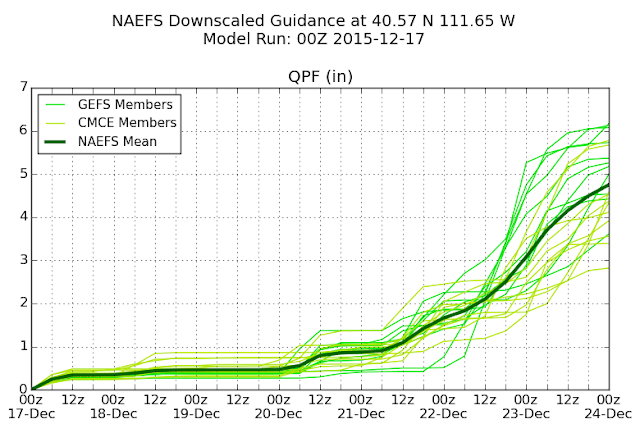 Avalanche conditions are already dicey (see this important post by UAC forecaster Brett Kobernik), but next week the backcountry could come unglued as the overall pattern is both wet and windy.  We'll see how things shake out in the coming days.

I was pretty shocked yesterday to see the facebook post below from the Salt Lake Tribune, which called for 6-12 inches overnight last night. 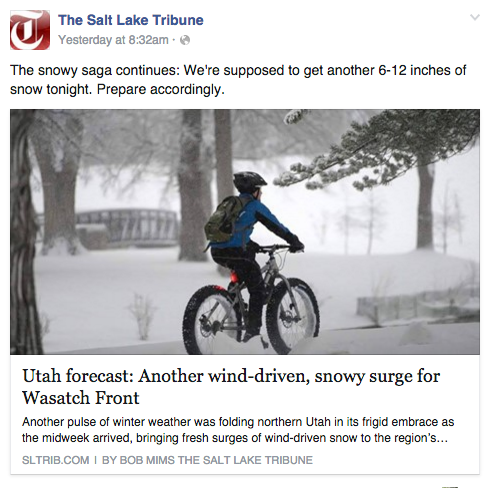 I went back through the National Weather Service forecasts that were available at the time and could find nothing to justify such a posting.  In fact, the forecast for the Salt Lake Valley that would have been available at the time of the post above called for an accumulation of "around 1 inch."  That appears to have verified nicely, at least at my house. 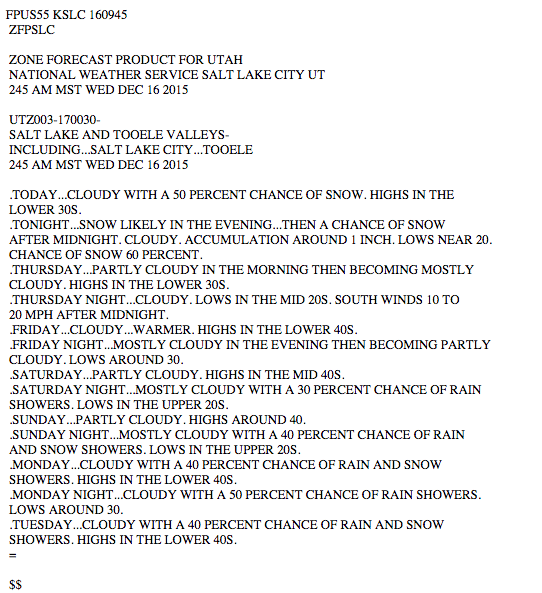 Forecasting is hard and we're going to have some false alarms and underpredictions, so erroneous social media reports like the one above really bother me as they erode public confidence.  The National Weather Service isn't perfect, but they provide reliable, unsensationalized, timely forecasts for northern Utah at http://www.wrh.noaa.gov/slc/.
By Jim S Posted at 12/17/2015 08:41:00 AM