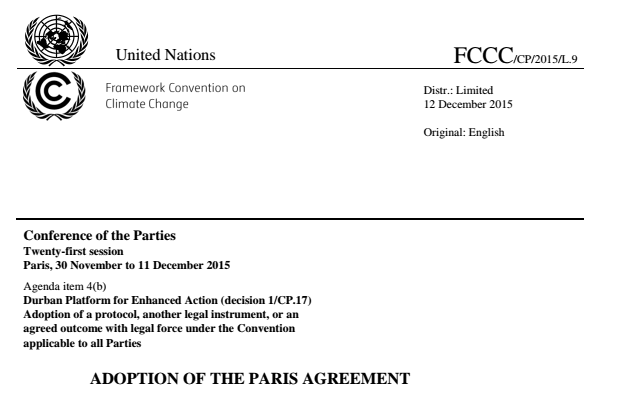 Today representatives of 195 nations approved an agreement that commits every country to reduce greenhouse gas emissions.  The full document, available here, recognizes that climate change "represents and urgent and potentially irreversible threat to human societies" and that "deep reductions in global [greenhouse gas] emissions will be required."  The agreement seeks to hold the global average temperature "to well below 2ºC above pre-industrial levels and to pursue efforts to limit the temperature increase to 1.5ºC above pre-industrial levels, recognizing that this would significantly reduce the risks and impacts of climate change."

At the same time, we need to nearly quadruple our global energy production to bring the developing world up to a reasonable standard of living.

It has been said that a journey of 1000 miles begins with a single step, and an optimistic view of the Paris Agreement is that it makes the first step on that journey.  However, we shouldn't lose sight of what ultimately needs to be done.  Incremental improvements in efficiency and lifestyle changes such as riding bikes and driving hybrid cars are necessary are good, but they are not sufficient to meet the long term need for carbon neutrality.  As Richard Smalley, the 1996 Nobel Laureate in Chemistry once wrote, we ultimately need "cheap, clean energy in vast amounts."  In other words, innovation is needed to make a quantum leap in how we produce, distribute, and store energy.