Not Much Change in the Weather or Seasonal Forecasts

There's not much change in the weather forecast from yesterday.  A cold front will move across northern Utah late today and early this evening, ushering in a period of mountain snow.  Snow on the benches may begin as rain and turn to snow, with the transition happening a bit later on the valley floor.  I'm sticking with 4-8 inches for Alta-Collins.  Although mountain snowshowers are possible at times in the wake of the system through Saturday, as things look now, I'm not expecting any major accumulations in that period.  The US models are advertising mountain snow for Sunday associated with a warm-frontal passage, but the EC is a bit less enthusiastic.  Both models are encouraging for the cold-frontal passage on Sunday night.  Keep your expectations low and your hopes high. 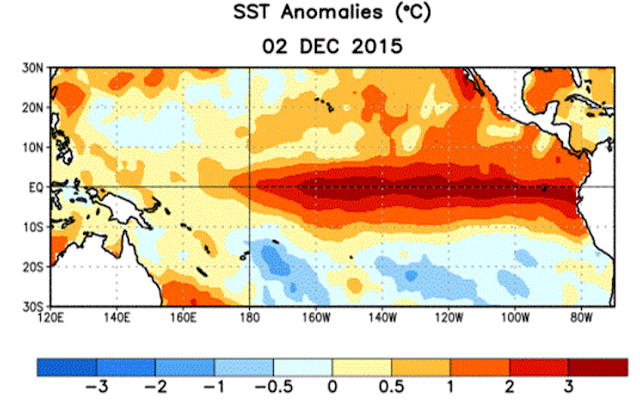 Strong El Nino conditions are expected to persist through winter, with CPC forecasters expecting it to rank as a top-3 event since 1950.

We currently sit at 50–60% of average snowpack at upper elevations in the central Wasatch.  The snowpack water equivalent at Snowbird sits at 4.3", compared to an average of about 8.5".  A slow start to the ski season is deeply disturbing, but no cause for panic.  A lack of correlation between El Nino and northern Utah snow is such that we can still end up pretty much anywhere from below to above average by the end of the season in the central Wasatch.

There is, however, one thing we can guarantee for your backcountry skiing adventures — a persistent weak layer thanks to our current rotten snowpack.  Unfortunately, this weak layer is likely to linger for some time in many areas.  We're all desperate for the steep and deep, but throttling back will be a necessity in many areas as we add weight to this house of cards.
By Jim S Posted at 12/10/2015 08:57:00 AM