Bloody Cold in Some Spots

With generally calm, clear, dry weather in place over northern Utah, overnight minimum temperatures are getting way down there in some spots.

Meanwhile in the friendly confines of the Salt Lake Valley, we hit minima of 22ºF at the University of Utah and 19ºF at the airport.

The Cache Valley, Bear River Valley, Rush Valley, and Uinta Basin are well known for low minimum temperatures.  These are basins or valleys that are largely enclosed, resulting in very light nighttime winds during periods of weak flow.  The lack of flow and associated turbulence reduces the mixing of air near the surface at night, allowing temperatures near the basin or valley floors to drop very low.  Note that this has nothing to do with "cold air flowing to lower elevations" as is commonly claimed.  Studies show repeatedly that shortly after sunset the flow in these very cold low-elevation areas typically becomes quite weak, which limits mixing and allows the air near the surface to cool dramatically.

There is one other factor presently at play in the Cache Valley, Bear River Valley, and the Uinta Basin: Snow cover.  Yesterday's modis image shows extensive snow cover in these areas, in contrast to the Salt Lake Valley, which has only spotty coverage. 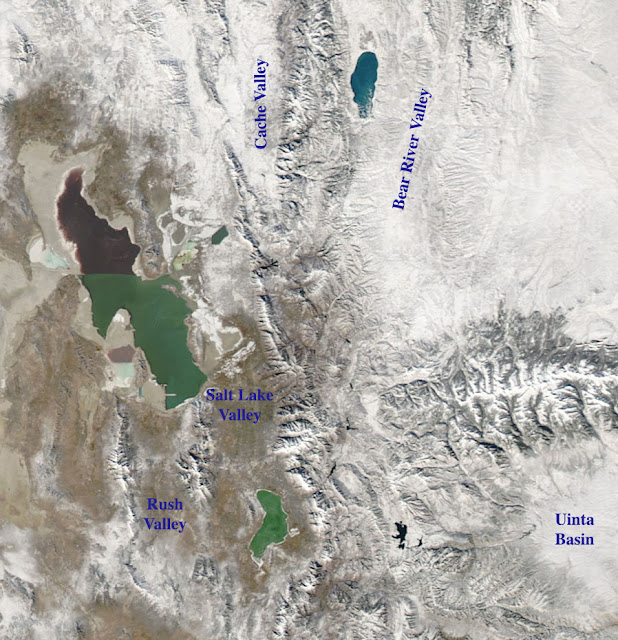 Ultimately, the presence of snow leads to stronger inversions within the valleys and basins of Utah. We're fortunate to be snow free in the Salt Lake Valley at the moment.
By Jim S Posted at 12/02/2015 09:17:00 AM