Looking to the Late Thursday Fropa

Although there is quite a bit of spread amongst the various models concerning precipitation, they are in good agreement that we will see a frontal passage late Thursday.  The image below is the 1200 UTC GFS forecast valid for 5 PM MST tomorrow (Thursday) showing the front entering the Salt Lake Valley at that time.  The timing is a bit earlier in the 1200 UTC NAM and the 0000 UTC EC. 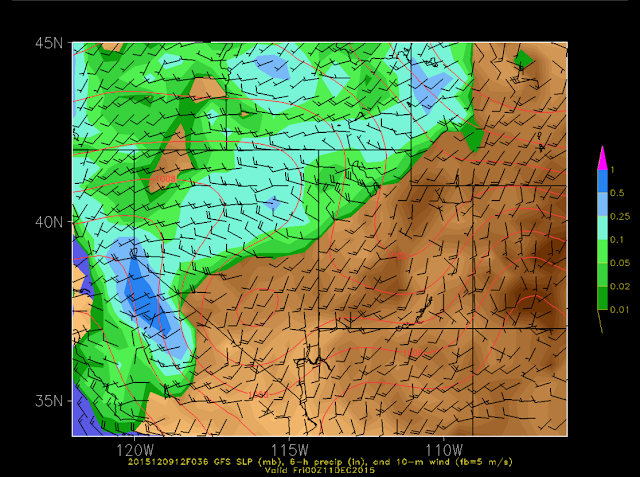 Those of you still walking around in shorts on campus might want to think about wearing pants if you will be heading home late in the afternoon as it will probably be blustery in the post-frontal environment, although it's tough to say of snow levels will immediately drop to bench levels right after the frontal passage or if that will take a couple of hours longer.

I'm seeing some odd precipitation numbers being generated by the various models for the frontal passage.  From 5 PM Thursday to 5 AM Friday, the 12-km NAM calls for .85" of water and about 13" of snow for Alta-Collins.  In contrast, the high-res 4-km NAM calls for only .43" of water and about 6" of snow and the GFS is in with about .42" of of water and about 8" of snow.  It's quite unusual to see the 12-km NAM producing more than the 4-km NAM or even the GFS, which tend to forecast big amounts on a regular basis.  It seems that the model precipitation forecasts are now so out of whack that it's impossible to get a decent calibration going.

Given that frontal precipitation periods tend to feature less orographic enhancement, I'm leaning toward 4-8" for Alta-Collins the Thursday night period ending around 5 am.

As I look at the medium range out to 10 days, I think things look better than they have been the past couple of weeks, and certainly active enough to keep the inversion at bay, but differences between the NAEFS and EC ensemble members are such that I'm not sticking my neck out with any bold forecasts yet. Keep your fingers crossed.
By Jim S Posted at 12/09/2015 11:29:00 AM