Déjà Vu All Over Again

The Utah team had a well deserved "night on the town" last night and discovered that Tug Hillers are just as snobby about their snow as Utahn's!

We are, however, gearing up for another intensive observing period today.  Lake-effect banding is already beginning to setup, it's starting to snow at our North Redfield site, and at the moment we have something called beautiful lake-effect vortex (comma shaped feature in the box below) about to make landfall.  Awesome!

Given that the storm is just starting, I thought I would show some of the equipment that we use in the field to measure snow.  We've already discussed the manual observations in a previous post (see Nuking Snow in North Redfield, NY), so the emphasis here is on our automated snow study station.

Perhaps the most important aspect of making snow measurements is locating the equipment in a wind sheltered area.  We have a good one in North Redfield with the instruments buried in a clearing in high brush.  It is surprisingly wind sheltered and we don't have high trees, especially evergreens, to intercept the snow before it gets to our equipment. 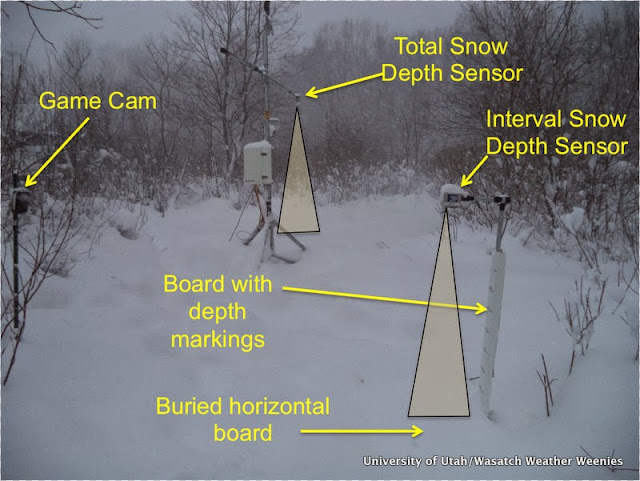 The tripod that you see above contains standard meteorological instruments that measure temperature, relative humidity, and wind speed (wind speed sensor just off top of photo).  The white box contains a data processing unit known as a data logger (we are partial to those from a company called Campbell Scientific) that pulls all the data together and stores it.

We use ultrasonic snow depth sensors to measure both the total depth of snow on the ground and the depth of snow on a snowboard.  We wipe the snowboard every 6 hours, so we call it an "interval" board because it tells us how much snow falls within the 6-hour interval.  Ultrasonic snow depth sensors send out a pulse of inaudible sound waves that reflect off the snow (crudely indicated by triangles).  The time taken to reflect off the snow and back to the sensor can be used to determine the height of the snow.  Changes in the height of the snow help us infer the snowfall rate.

Here's an example of our observations of total snow depth on the ground from December 4 to December 15. You can see how we had a thaw on the 5th that melted out all the snow, then a weak storm on the 7th, and then the monster event on the 11th.  The total depth of snow on the ground increased from 15-80 centimeters during that period, which is a net change of 26 inches.  We recorded 41 inches of snow based on measurements every six hours on our snowboards during that period.  The difference is settlement of snow on the ground during the storm, which is why observations on snowboards rather than total snow depth are usually used for "official" snowfall reports.

We've also adapted a game camera to take photos of our interval board during storms.  It's a bit hard to see, but we have markings on a board that rises vertically from our interval board so that we can evaluate the depth of the snow in these photos.