The Holidays Are Finally Here

Time for a quick look at the snowpack.  First, my favorite SNOTEL station, Ben Lomond Peak, which always seems to get hammered in any storm that features southwesterly to westerly flow and subtropical moisture.  Indeed, the water totals there from last weeks storm cycle are staggering with an increase in snowpack SWE from 6 to 16 inches (green line). 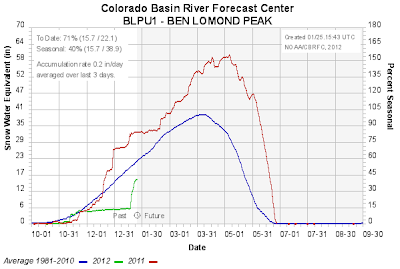 I sometimes question the huge water totals that this site observes.  I have visited it many times in the winter and am always amazed at how much snow there is there – typically the snowdepth there (@ 8000 ft) is comparable to Alta–Collins (@9700 ft).  There is little doubt that it is an incredibly snowy place.  I'm not sure I buy a 10" increase, but I'm sure they got plastered.  Let's assume the data is legit.  This puts them at 71% of average, with a snowpack SWE that is comparable with early Jan in an average year (compare green and blue lines).

At Snowbird the snowpack SWE increased from about 9 to 15 inches (green line).  This also puts them at about 71% of average with a snowpack consistent with early January in an average year. 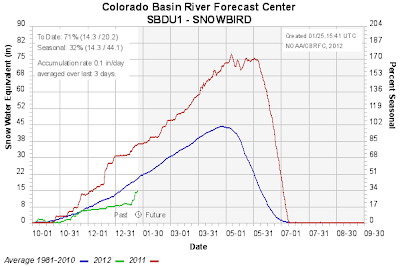 That being said, this site has changed some, so direct comparison of this year with average could be a bit misleading.  I suspect the snowpack we presently have might be closer to that of late December.  For instance, the current Alta-Collins snow depth of 70 inches is just a bit greater than the average Christmas morning snow depth (1997–2010) of 63".

Finally, looking to the Park City side at Thaynes Canyon we see an increase in snowpack SWE from about 5 to just over 8 inches.   This gives them 63% of average snowpack, which is similar to late December in an average year. 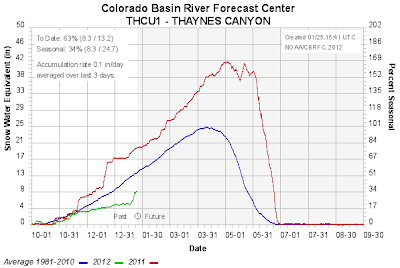